INTRODUCTION
We all know the drill: a limited number of days in pre-production, packed show days and tear down. What makes Andy Tourell's job fascinating, is that he does this eight times a year, in eight countries, across three continents, on land and sea.

LET'S SET THE SCENE
Andy Tourell has spent most of his career (and his life) on the water. So when he became the Event Director for the Extreme Sailing Series, it was no surprise that water wasn't much of an obstacle.

I got to sit down with Andy to not only learn about stadium like racing on the water, but also what goes into the following: 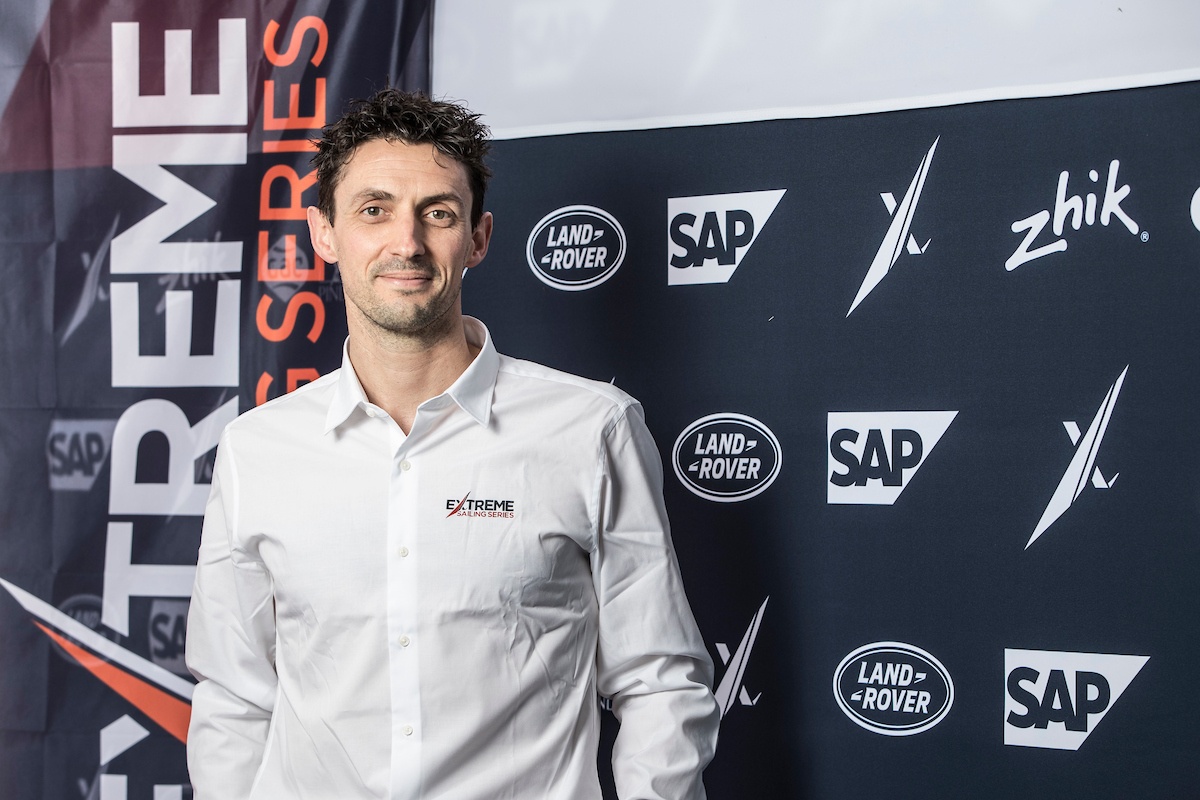 Let's get started. So where did you grow up?
I grew up in Nottingham, which is in the center of the U.K., almost as far from the sea as you can get. But since I could walk, I've been encouraged into the water. I have been sailing since I was six years old.

So what was 20-year-old Andy like?
I was just finishing a master's degree in oceanography and working down in the marinas. I received a phone call from Dee Caffari, the first woman to sail both directions around the world, non-stop.

She offered me a job racing across the Caribbean, and then competing in the Caribbean season in 2001. That was the starting point of my career in the industry. At 29, I skippered a Volvo 60 around the world as part of the Hugo Boss sponsorship of Alex Thomson Racing. 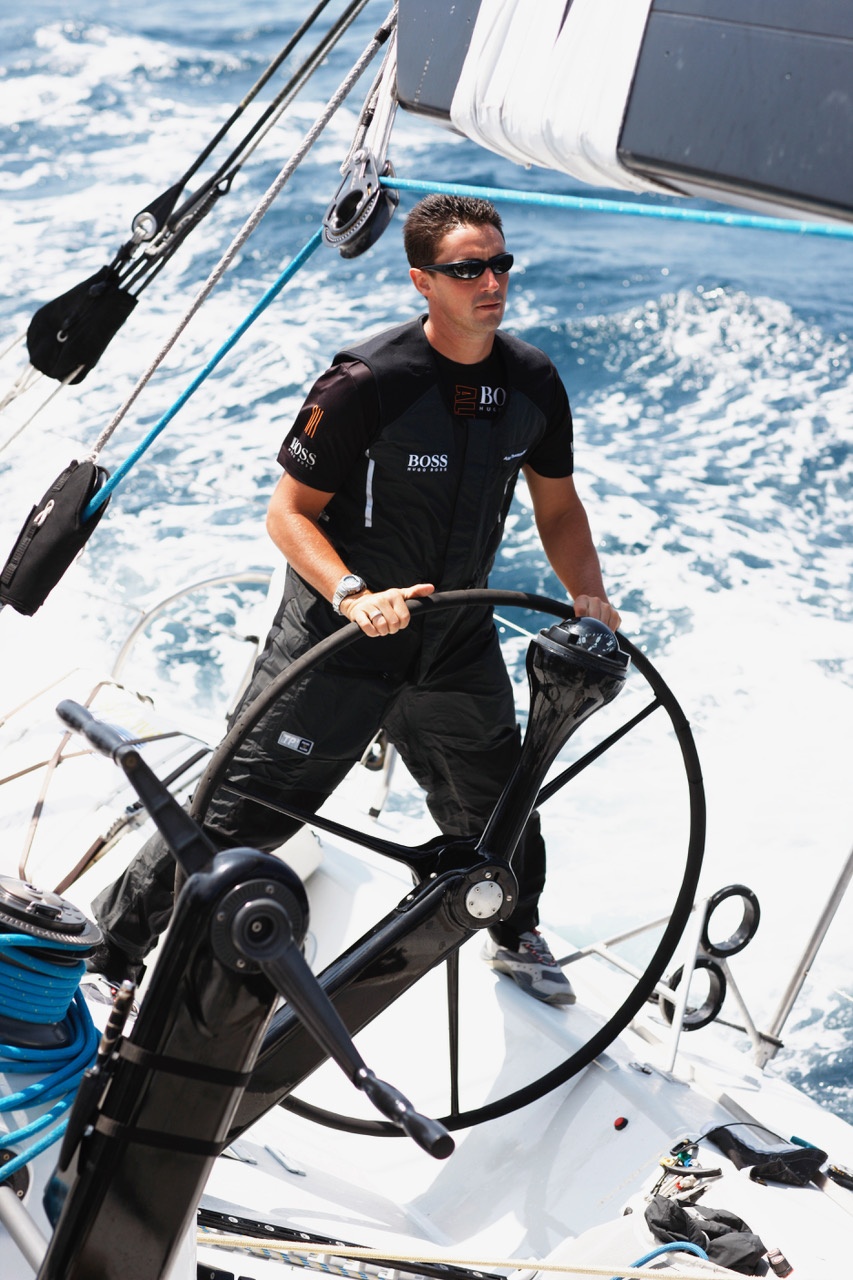 Fast forward to today. If we're hanging out with some of your friends at a pub, and they're a little tipsy, how would they describe you?
Tireless. I don't slow down very well. I'm always searching for improvement. I give a hundred percent to pretty much everything I do, whether it's my family, my work, or whether it's my own personal interests.

If you were a piece of event equipment, what would you be and why?
I'd probably be the boat because it's the platform that people use to showcase who they are and what they're capable of.

What is your elevator pitch for the Extreme Sailing Series?
The Extreme Sailing Series changed the way that sailing was seen when it pioneered the Stadium Racing concept in 2007. It's made sailing accessible, engaging, and provides opportunities which are unique in the sports world. We put guests on every boat in every race, which is pretty incredible. It provides the platform for sailors and brands to differentiate themselves from their competitors.

Where did the concept come from?
We wanted to bring sailing to the public. The boats come within meters of the shore, so you don't just watch the sailing, you can hear the sailors. The sailors engage with the crowd, commentary in the race village makes it understandable, and all of the boats are one design. It's first across the line wins. Everything is simple.

Until they crash.
Hah. Exactly. But that's what makes it exciting. 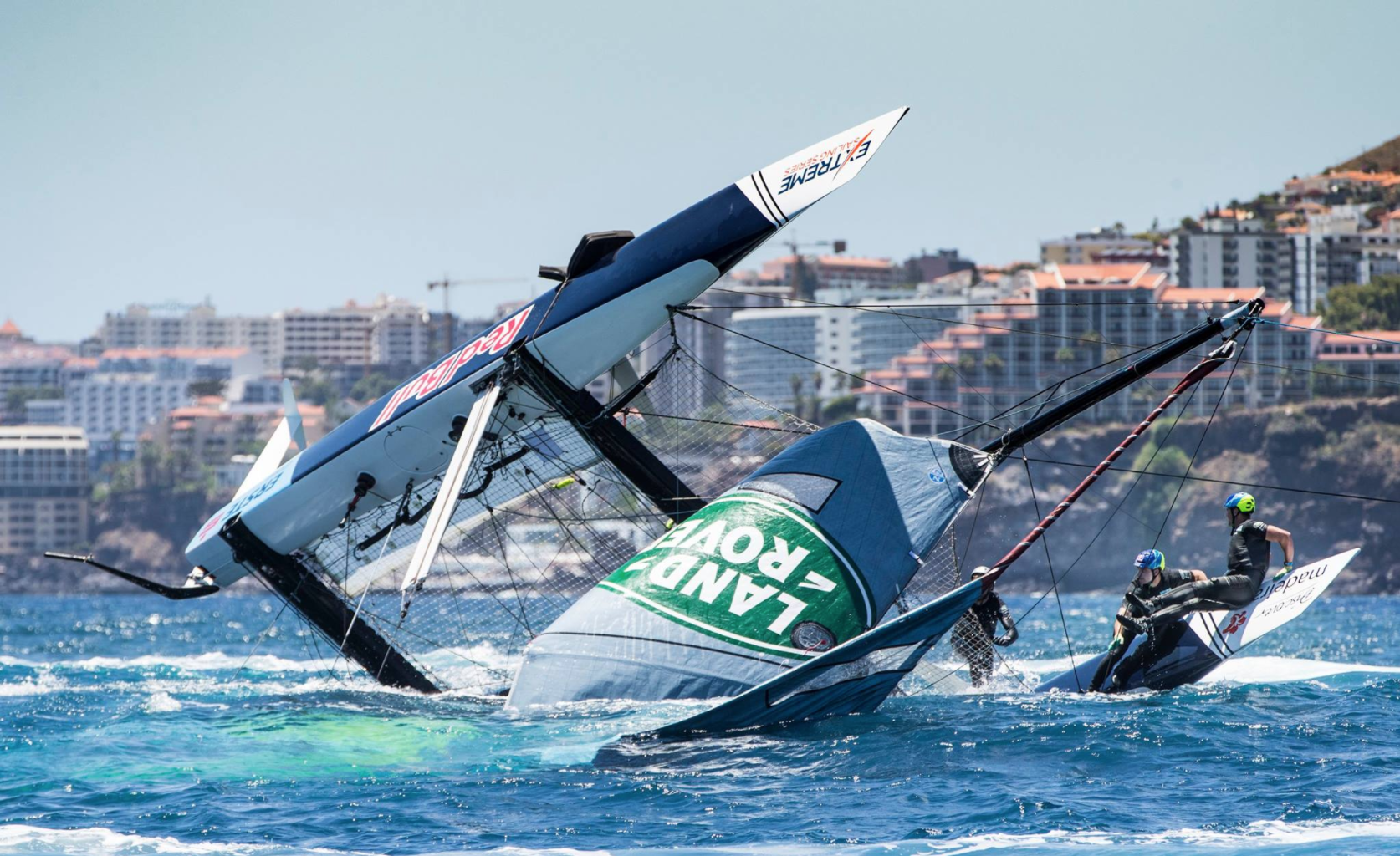 How many races and locations now?
We have eight venues around the world. Each event is four days of racing, with six to eight races per day, so you'll see up to 32 races per Act. We created the Extreme Sailing Series in 2007 as a European event with four teams. Then we went global in 2011, creating one umbrella brand that spanned Asia and the United States. We hit a minimum of three continents per year. We have visited 28 different venues over the past 11 years so far, with two brand new venues coming up later this year in the Americas and more planned for next season.

"We hit a minimum of three continents per year."

Wow. How do you think about growth? Is it about increasing the number of events or locations?Growing the Series doesn't necessarily mean adding more events each year. First and foremost is the integrity of the racing, so we look for good sailing conditions, while also picking venues where the layout fulfils our stadium racing concept - the ability to get boats within meters of the shore.

Growing the Series is also about increasing the number of markets touched. We need to grow the number of sailing venues that are commercially interesting for our partners. We also look for good sailing conditions and the layout of the marina to fulfill the stadium concept - the ability to get boats within meters of the shore.

Public engagement is essential, too. We look for locations that don't change the public's behavior to see the racing. This fall, when we bring the Series to San Diego, Harbor Island is a prime location because you have a natural footfall of people. So, from the outset of adding a new venue like San Diego, there's a vision to turn this into a long-term return for the city.

And when was the moment where you were like, "Holy shit, this is going to be big."
The pivotal moment for us was when we turned our individual circuits into one global event in 2011. It was a huge decision for us as we relied on certain partners, but we believed in it and it absolutely paid. We've hit some truly spectacular venues like Boston, Singapore, Saint Petersburg, Istanbul and Sydney. It's been incredible.

Another big moment was when we transitioned to the GC32s which are the foiling catamarans. It's cutting-edge sailing technology, and it's really added a new dimension to the racing. 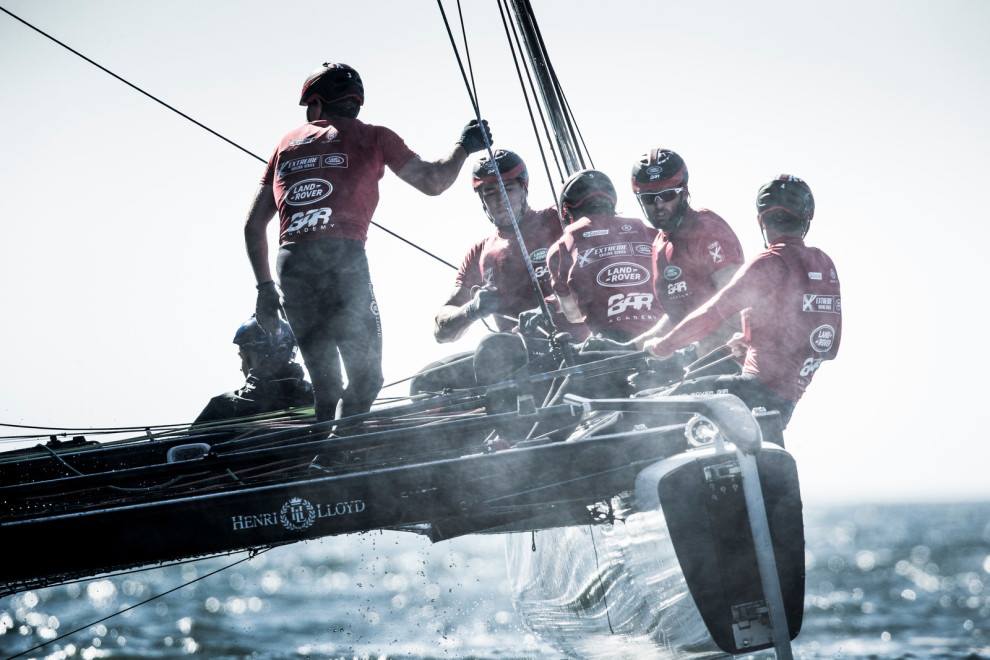 I'm curious, what are the biggest logistical challenges when producing a global sailing Series like this?
The biggest challenge for us is shipping the boats and racing materials across the globe. Whatever we're using has to fit inside a 40-foot container, which is placed upon a ship to make it to the next venue. The racing catamarans, safety equipment, racing marks, branding and media assets—it's all shipped. When we land at an event, we unpack and create the Series within a very tight timeframe—four days to build, 24 hours to pack up. 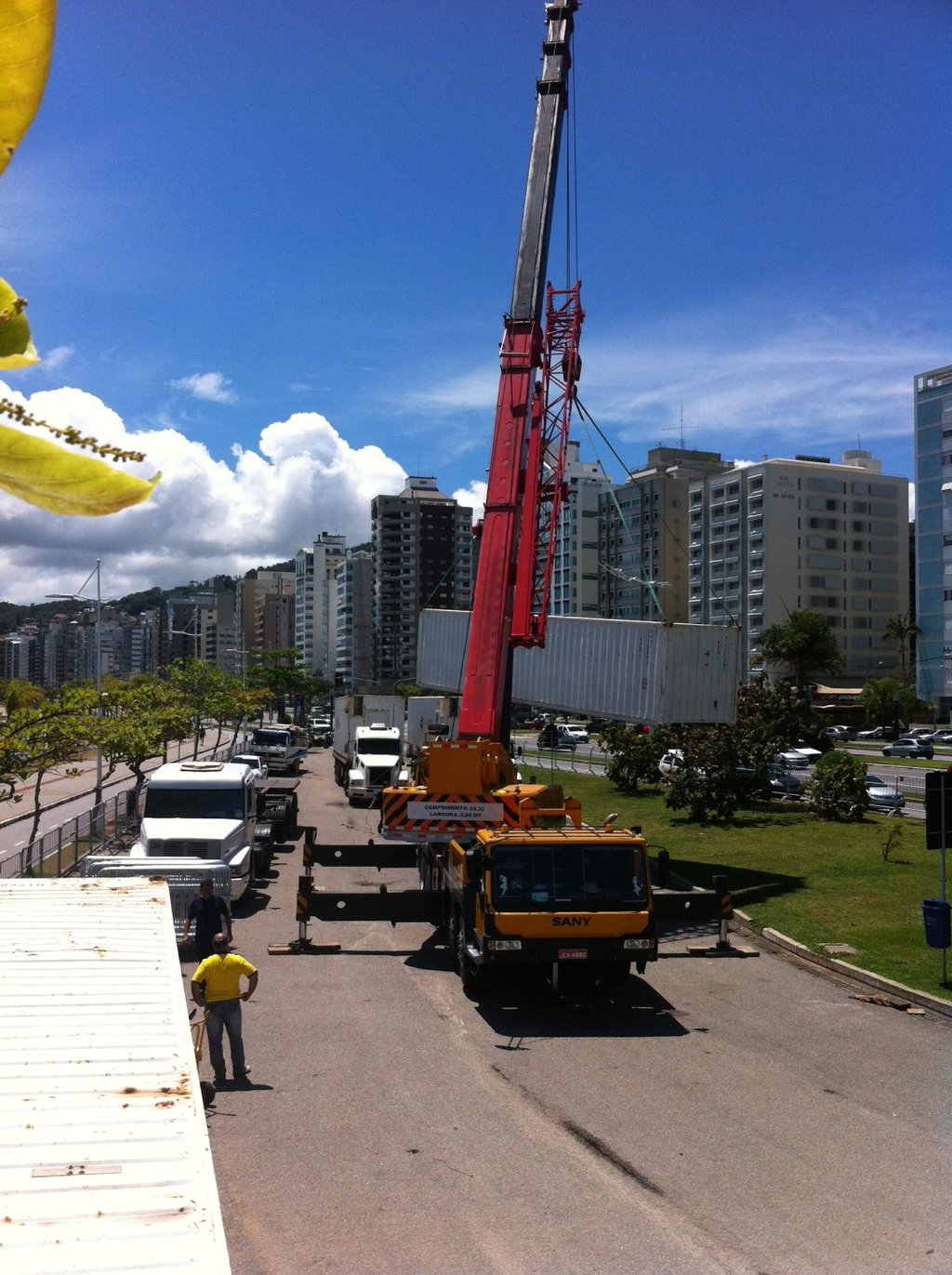 We also rely heavily on weather conditions and creating an event calendar that works for all venues. It's the trickiest part of the whole Series. We're just about to confirm the 2018 calendar internally, and that's been seven months of work.

How many people are typically involved in the build?
If you include contractors for race management, some event crew, caterers, and our own team, it's around 65 people. At the local level, we have ground agents, local PR agencies, and volunteers who are absolutely fundamental to delivering the event. We make sure that the community is fully engaged with the event, providing additional engagement and return on investment for the venue and, also, reducing the number of people travelling long distances.

How are you thinking about deploying things like livestream and digital content?
It's an evolution within the media landscape. Everyone's attention spans are dropping, and people are digesting news differently. People will join Facebook pages, or follow Twitter and Instagram handles instead of visiting individual websites. We use a digital first strategy, but still incorporate traditional media streams. You can't gauge performance by number of likes and shares. 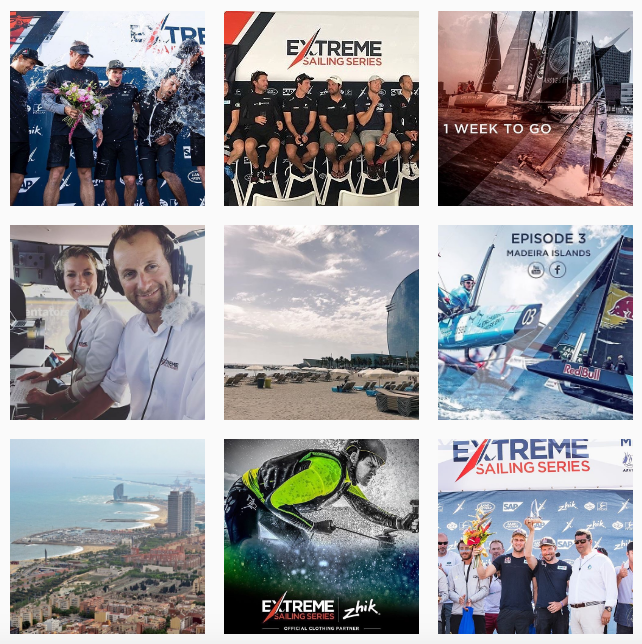 Use your digital strategy to tell a story. IG @sandiegoextremesailing

We need to tell a story. People want to see the human story underneath it all. They want to get to know the extreme sailing athletes, who are some of the best sailors in the world. It's up to us to tailor the content to engage the correct audience.

"People want to see the human story underneath it all"

One medium we are using are sting videos and Video News Releases. We can use live clips, and literally clip 20 or 30 seconds and stick that on social media without compromising traditional media. We've been able to increase the number of programs in our TV series that way.

There's definitely some exciting crashes on your YouTube Channel: 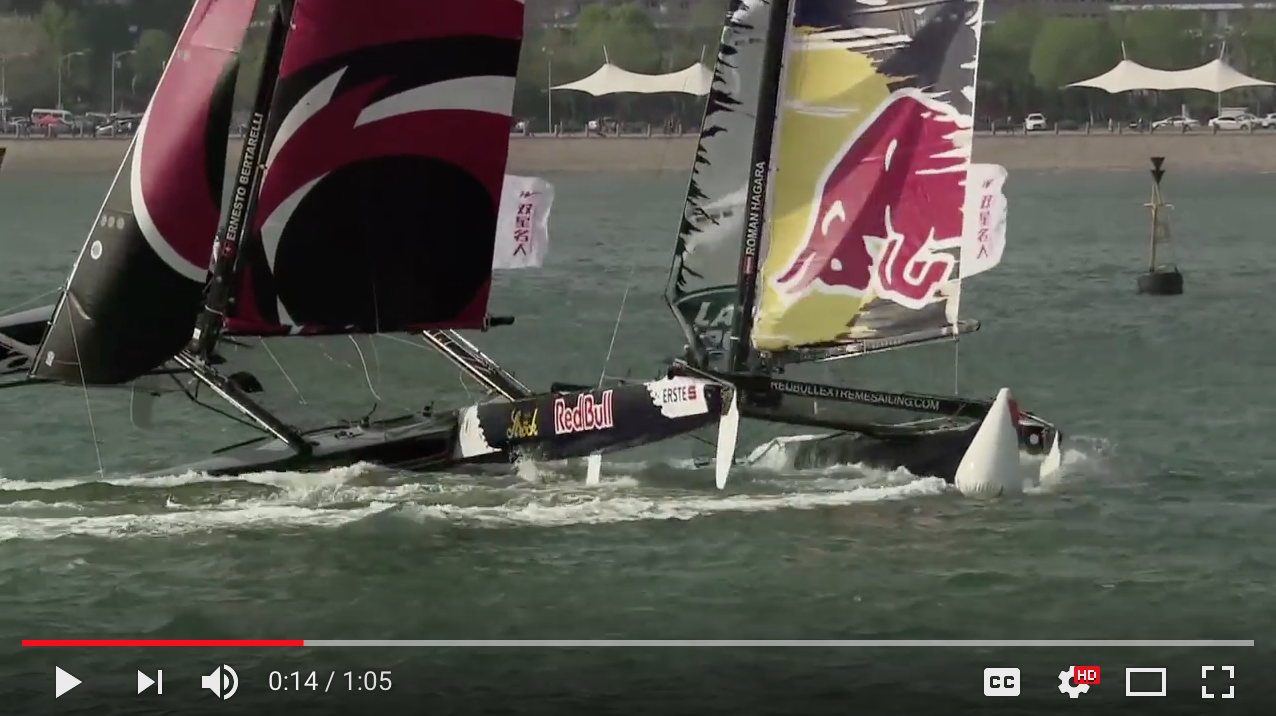 I can see a very cool virtual reality experience component with that. I know you can be on the boat in the actual race, too.
Exactly. There's been development of virtual reality to give spectators a unique look at the race. But nothing beats the real deal. That's what makes this sport so unique. You can't sit in a Formula 1 race car, but you can sit aboard our boats and we make sure it's safe on every boat and every race. 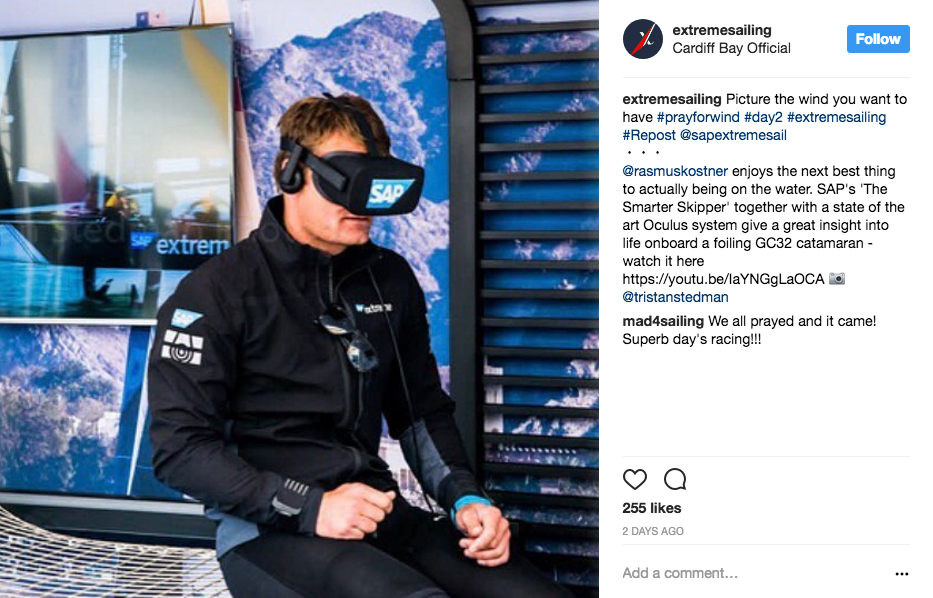 What's the best leadership advice you've been given and from whom?
First and foremost, don't do anything you're not prepared to do yourself. It doesn't matter what's going on. We face a lot of curve balls in putting on these events and it needs everybody to muck in. So it doesn't matter what happens, I’m always prepared to get stuck in, if the toilets need cleaning I'll clean them. When it comes down to it, I would never expect somebody to do something that I wouldn't do myself.

"I would never expect somebody to do something that I wouldn't do myself."

In your professional life are you insecure about anything?
I don't think I am because everything that I'm doing in my professional life is true to what I believe in. So whether I make mistakes or things work out well, I've made the decisions for the right reasons.

This is a passion. Not all of the decisions that I've taken have worked out for the best but I put my hands up if I am wrong. I hold people accountable if they are wrong. I congratulate people when they're right. 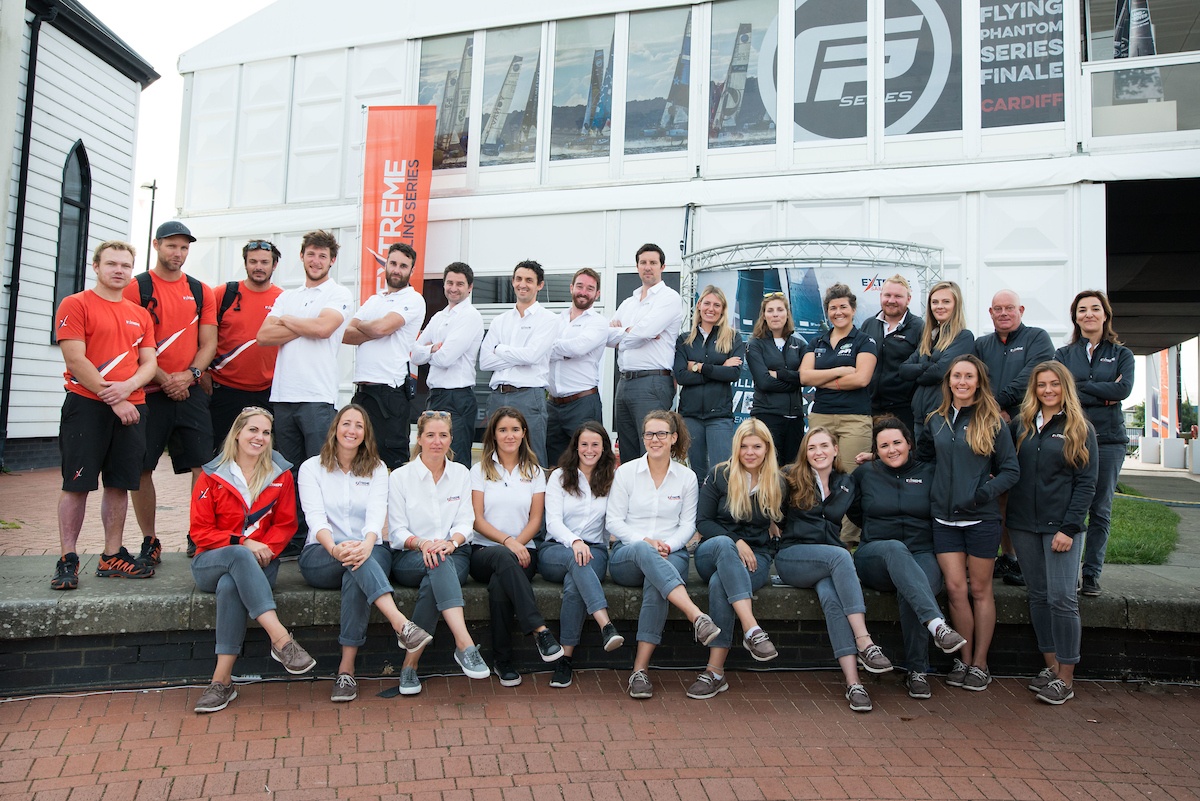 Do you have any parting wisdom for folks in the event world that are producing other experiences like you?
Fundamental is to be true to what your event is. Continually evaluate your position whether it's in the sporting domain or entertainment domain. Continually question yourself. The success that we've enjoyed over the last 11 years came from the decision to stay true to our core beliefs.

"Be true to what your event is."

LENND's comprehensive platform helps event teams manage all aspects of the logistics and operations process. From incoming requests, approvals and management of inventory needs and credentials, to document management and tracking, to production scheduling, workforce management and more. The future of event operations is here.

Get event tips, interviews, advice... Delivered Weekly.
Join the top event professionals who get our content in their inbox first.
Give it a try, it only takes a click to unsubscribe.
You might also like...
The Best Speaker Management Software for Conferences: A Comparison Guide for 2022
11 Memes Any Music Festival Director Can Relate To
Building a Virtual Event from the Ground-Up: 5 Lessons for Nonprofits
[New Data] 10 Trends Shaping The Future of Credential Management
Evaluating Sports Accreditation Software? The Top 6 Questions to Ask
Top 30 Resources for Credentialing Managers to Bookmark in 2022