(8 Min Read with a couple VBs, 6 min read without)

INTRODUCTION
There are those with personality and there are those that "sparkle". My friend Luke Hannan... well he sparkles. And not just when he's throwing paint on thousands of people.

If you don't know what I mean by sparkle, this interview may not be for you. 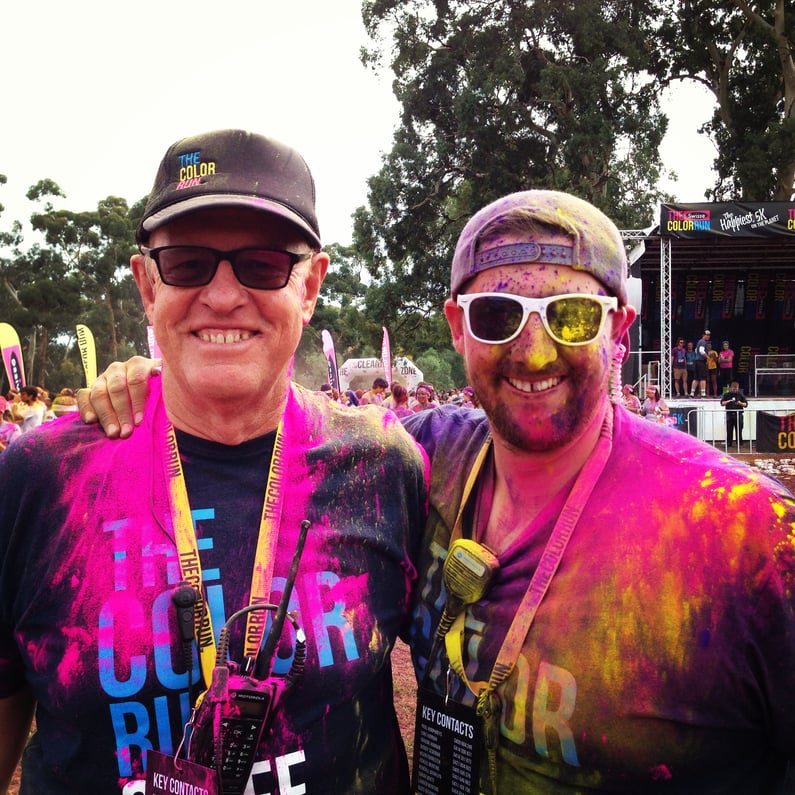 Photo Cred: The HanMan himself @hanman012

LET'S SET THE SCENE
I have a pretty decent game of Popcorn going on here (Rules of the game: the person I interview tells me who to interview next). Sooo... after my chat with The Relay Run's creator Keith Williams, Luke was one of the people we had to track down. I think Keith's words were, "Just ask him anything", and then he just chuckled.

So... I am coming into this not knowing what the heck I was getting into. But after Keith's interview, I was definitely ready for anything.

Where did you grow up?
I was lucky enough to grow up on the North Shore of Sydney, Australia.

Big family, small family?
I am the youngest of four kids (two brothers and one sister). They have all gone on to get married (as have I to my beautiful wife, Rosalind). Unlike me, they have all had multiple children -- so, now Christmas at The Hannan household is bloody CRAZY!!!

So what was 9-year-old Luke like?
NUTS!!! I had far too much energy, a severe case of ADHD and I was a good little athlete. 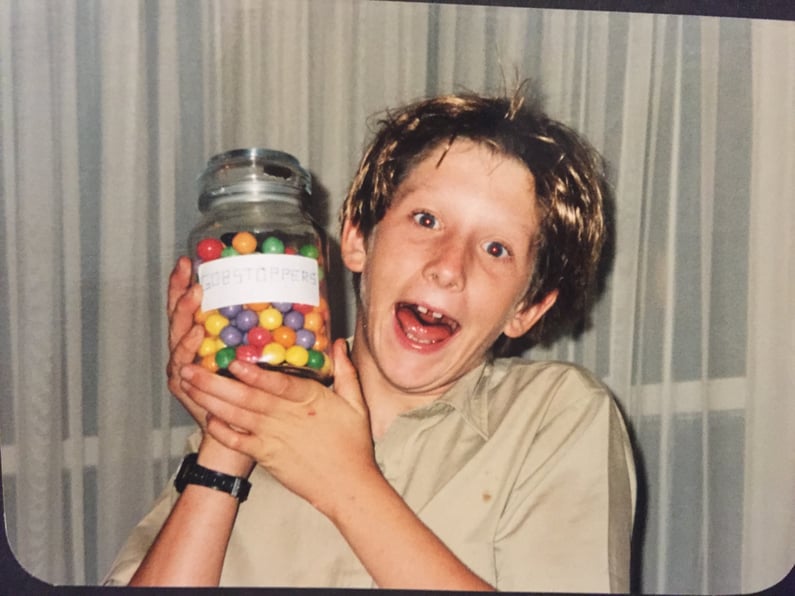 Something tells me not a lot has changed :).  But now thousands of people are loving you for it.
Hah! I am who I am. 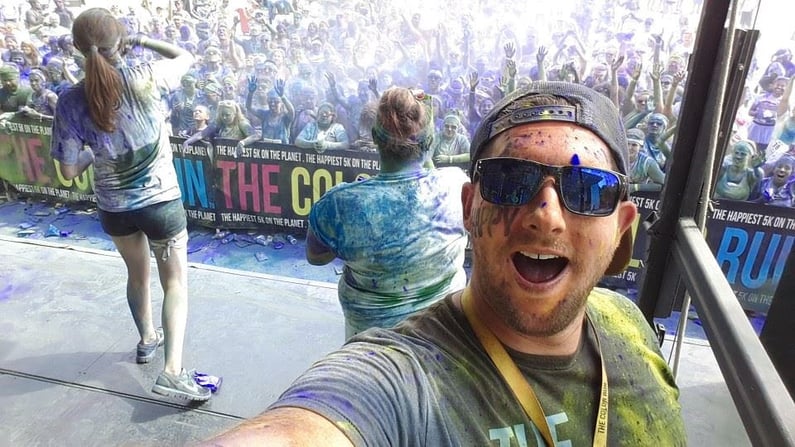 Do you have any nicknames we should know about?
Hahaha. My nick name is 'HANMAN'. My mates will try to tell you it’s a self proclaimed nickname... but it's not.

But isn't it true that you tried to “officially” change your name to THE HANMAN?
Not completely true...haha.

I mean, why wouldn’t you? And when you have kids, you can name your boy: The Hanman Jr.!
Ammmazing! Not sure I'll get that past the wife, but I like where you're head is at. BTW - I see my mates got to you.

Sorry Luke, you know I don't reveal my sources.

So, if my sources were a little tipsy how would they describe you?
OTTY! - Over The Top. When I was young, I was the kid that always took things that one step too far. Lucky to still be in constant contact with my high school friends. 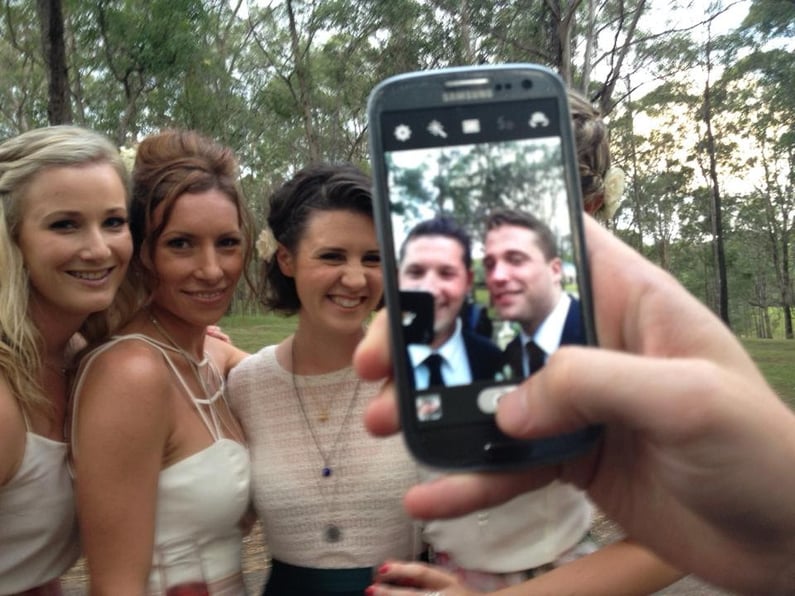 Tell me the first thing that comes to your head.
Oh boy. I am telling you right now, this is a dangerous game with me.

How do you take your coffee?
Latte with one "don’t serve me crap coffee as I won't drink it"!

VB or Crownie?
Gotta be a VB - Crownies are terrible!

Crocodile Dundee or Mad Max?
Mick Dundee for sure.

Nicole Kidman or Keith Urban?
Nicole Kidman - Only because I was lucky enough to be playing 2Up with her on ANZAC day.... what is 2up you ask? only the best game ever! Look it up!

Carlton or Collingwood?
Neither: I follow a real mans game, the game they play in Heaven: Rugby Union! If I follow any team in the AFL it is the SYDNEY SWANS!!!

And how would your wife define you fashion style?
Her answer... 'practical'. I’m not sure how I feel about that. 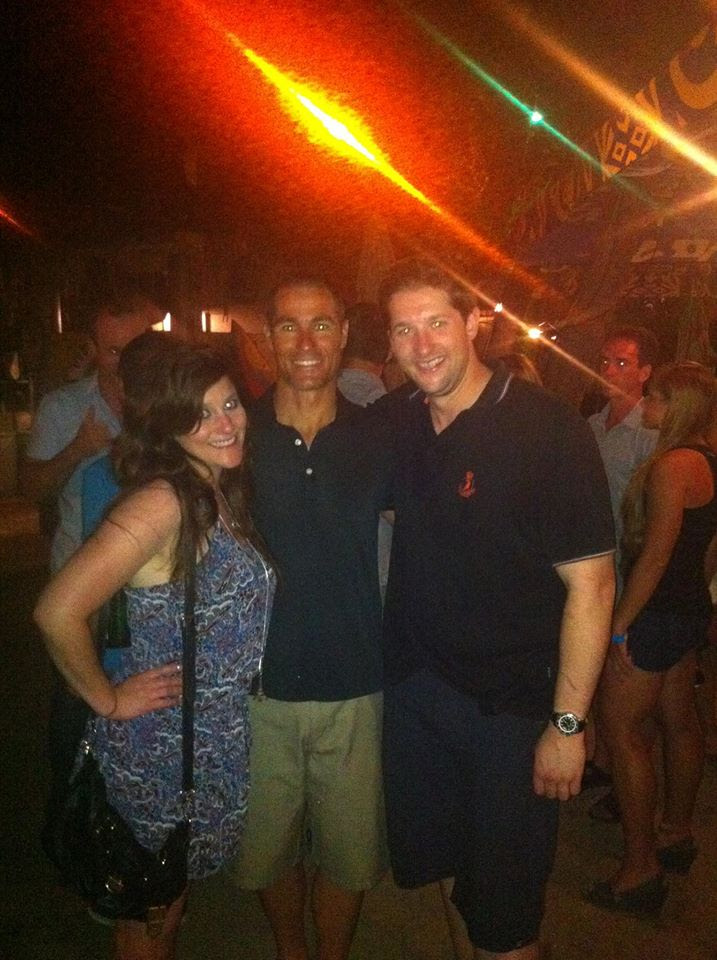 Luke and his incredible wife Rosalind at Ironman Kona

Ok, so let's get serious:

What’s your spirit animal?
Coyote, because the Coyote is bad ass! A playful Joker but beware of the dark side.

What do you do when you’re stressed?
The wrong thing usually!

What advice would you give yourself if you were just starting your career?
Go and get another degree at university - there is plenty of time for work and knowledge is power!

Oh, yeah... and stop drinking so much with your mates! 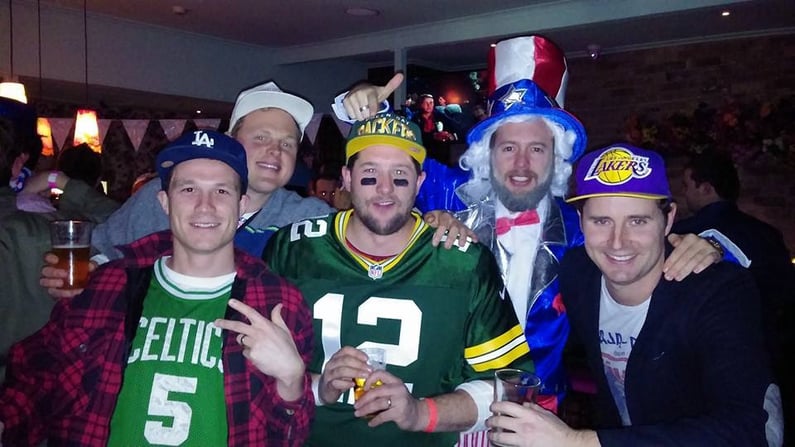 At this stage in your career, what is the best piece of advice you have received?
Learn to talk to people! If you cannot communicate your business will go nowhere.

If you could interview one artist (living or dead) who would it be and what question would you ask them?
I would like to interview "The Biebs" (Justin Bieber) and I would like to ask him where it all went wrong and how he turned into such a twat!

If you weren’t producing events, what would you be doing?
Attending them!

In all of your years in event production, what stands out as the most memorable?
Its gotta be up on stage MC TCR Perth last year. I thought it would be 'cool' to slide across the stage after a run up... it didn't go well. I went head over toe in front of 15,000 people who thought it was one of the funniest things ever. The other MC on that stage (still to this day) does not let me live it down!

Please tell me there is a video. (We want to laugh with you.)
If there was I would not be sharing it with anyone... it went into a vault. (:

Who is/was one of the most influential people in your career?
My dad, or as he is known around the office: 'G'. I have been around events all my life because of my dad. He was Vice President of IMG here in Australia for about 20 years. He managed some of the biggest Australian Olympic athletes and created some events that paved the way for other major events such as the Australian Open tennis. I am very lucky to work every day with my father who is also my best mate. He continues to guide me every day. 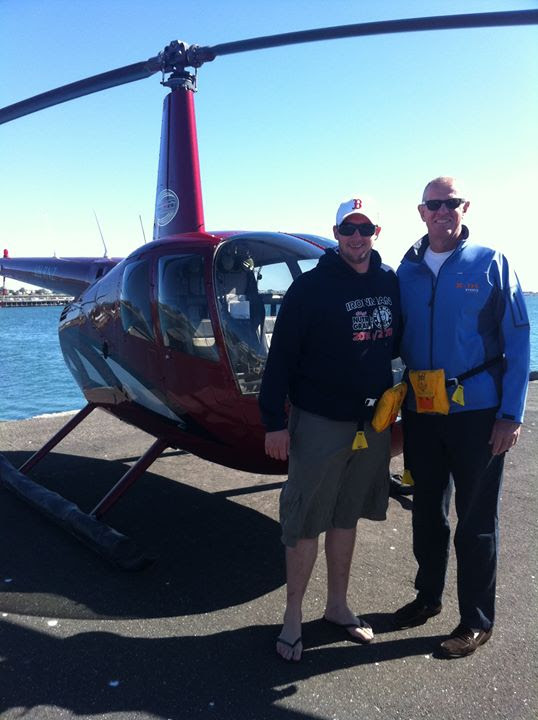 So if you could produce any event in the world, what would it be?
A Cheese Rolling competition. You know the ones where they roll a cheese wheel down the hill and all these people run after it and completely axe themselves? You would need a water-tight participant waiver and some high public liability insurance, but jeez it would be funny.

Now that is vision!

Speaking of vision, what's the vision for your business?
I want to be the biggest event management company in Australia. I don't necessarily need to do the most events, but more so the biggest, most popular events in Australia. We currently operate the biggest running series in Australia and we're about to launch another two massive events that I think will also be market leaders. Ever heard of ROC Race? ;)

At this point in your career, do you still feel challenged?
Yes, absolutely -- more than ever. Every day I am learning new things about myself and about my business. The industry is ever changing and can be challenging to keep up with. But, in my opinion it is all about staying ahead of that curved!

In what ways (if any) is the Australian event market (i.e. mass participation) different from the US or European market?
Australia follows the trends of both Europe and America when it comes to mass participation. However, there are some events coming out of Australia that are pretty close to being inline with the underlying current trends globally (just with a short lag... it takes a while to get info down under). 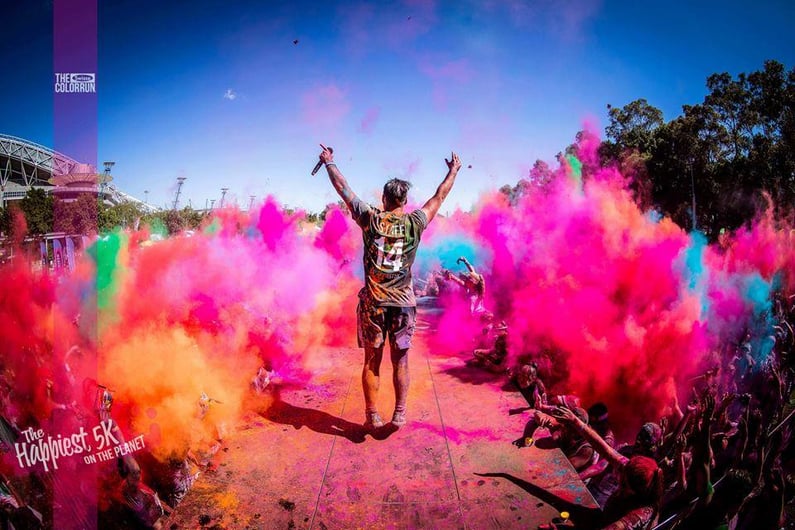 What are three key components to successfully expanding an event series in Australia?

FIRST: An Amazing team working with you.

SECOND: Finding the right partners to help elevate the status and presence of your event. This includes venues.

THIRD: First mover advantage. This is so important. You do not want to be an event that gains minor success by riding off the coat tails of more successful and very similar events and confusing the market. 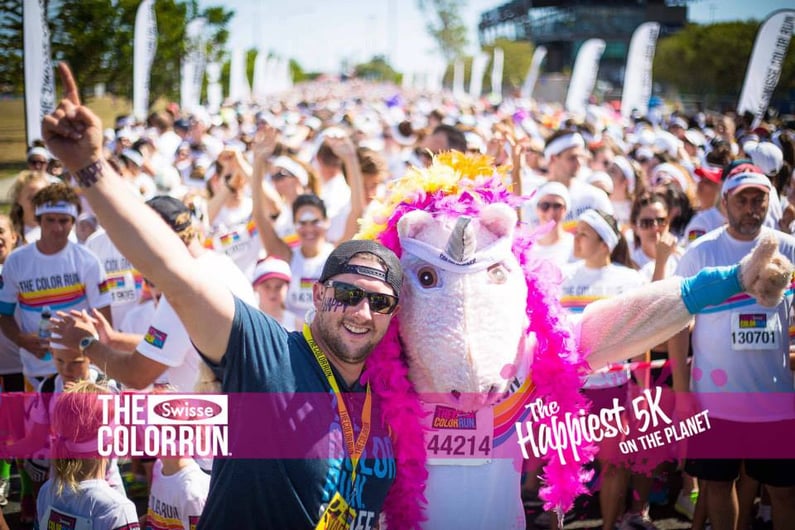 Do you think participants are expecting more out of the events they are participating in now versus five or ten years ago?
Absolutely, without a doubt! The cost of items coming out of China in bulk has meant that organizers can offer more to the participants for a cheaper cost price. When you can get it at one event then that is the benchmark and sometimes the expectation from participants. This also applies to the production level of event. 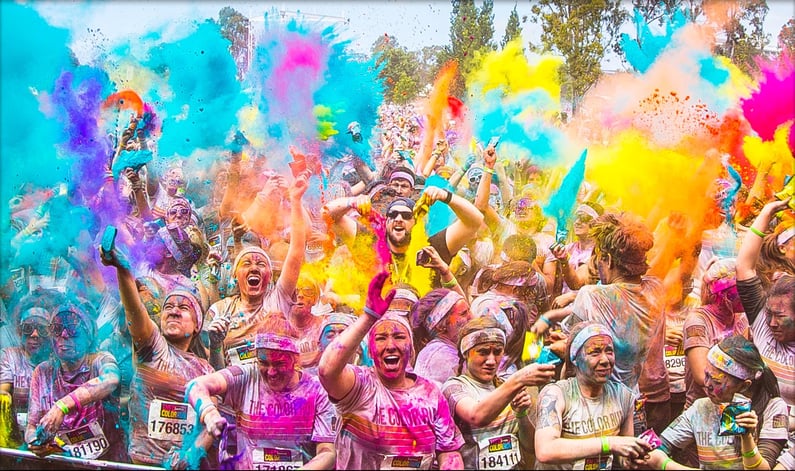 Photo Cred: Luke giving the fans exactly what they want.

Outside of the swag they get, what three things are they now looking for?
When looking at mass participation, I'd say:

FIRST: The ability to get dressed up and 'be silly' for a morning .

SECOND: The ability to compete, participate or conker the event with friends or family as part of a team!

THIRD: An experience that they can easily share socially with friends and family .

Oh yes... and the opportunity to get a SELFIE!

Just another Saturday for this #PartyPumper - Photo Cred: Luke Hannan

So, how do event companies evolve to support that change?
Never get complacent with what you have. You need to be looking for the next big thing whilst the current big thing is doing very well for you!

And, It has to be a legit even. People call bull-crap on sub-par produced events.

Who should we interview next?
Oh Mate! You have to speak with John Connors and Denny Thorne.

John is the National Director of Events at The Color Run USA & Denny is an International Account Manager at Bigsley and one hell of an MC. 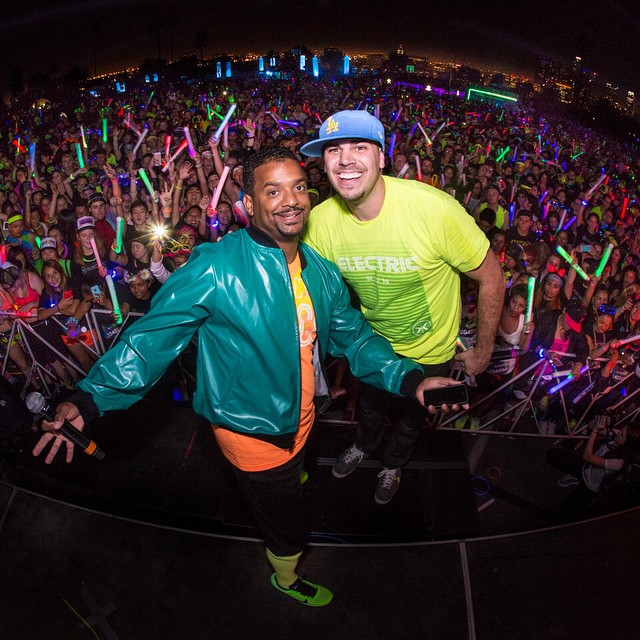 Parting Wisdom?
If you don't love it, don't do it! Events are not for everyone as they're very long days and stressful times. But for someone like me who lives and breathes events, I wouldn't want to be any where else! I am currently living out my dream job and loving every minute of it.

Oh yeah, and one more: "If plan A don't work, there are 25 more letters in the alphabet. So, stay cool."

MY TAKE-AWAY
There were three key things that really stood out for me after sitting down with Luke:

FIRST: He is constantly thinking about ways to innovate. And when he moves on an idea, he's all in. Just look at what he and hist team did with the expansion of The Electric Run and The Color Run down under. And just wait to see what he doesn with The Relay Run and The Wipeout Run next year.

SECOND: He has surrounded himself with incredibly talented team. I'm sure he got that by watching his Dad, but either way he's definitely figured out a way to pinpoint some great partnerships and surround himself with an incredible staff.

LASTLY: I guess this won't come as a surprise, but he's one hell-of-a-time. Whether it's a BBQ with family and friends, or a party for 25,000 people, his larger than life personality is electric and it shows in the experiences he creates.

BTW
If you want to get the interviews on the reg, we can email them to you. Sign up below (in the purple box).