INTRODUCTION
If you ever hear the complaint, "I just don't have time", I have found the solution. And she goes by #SuperMom

You see, SuperMom aka: Christine Bowen (mom of 3) is one of those rare birds who actually took that cliche advice and followed her passion. She quit her job mid-career (scary), worked for free to learn from some of the best in the event industry (who does that anymore?) and is now leading the charge with one of the most influential events in the running industry: RunningUSA.

So, if there is anyone we can all learn from, Christine could teach a few classes.

Christine's annual trip to Fenway the day before the Boston Marathon

Where did you grow up?
Deep River, CT.

I guess someone grew out of that phase. 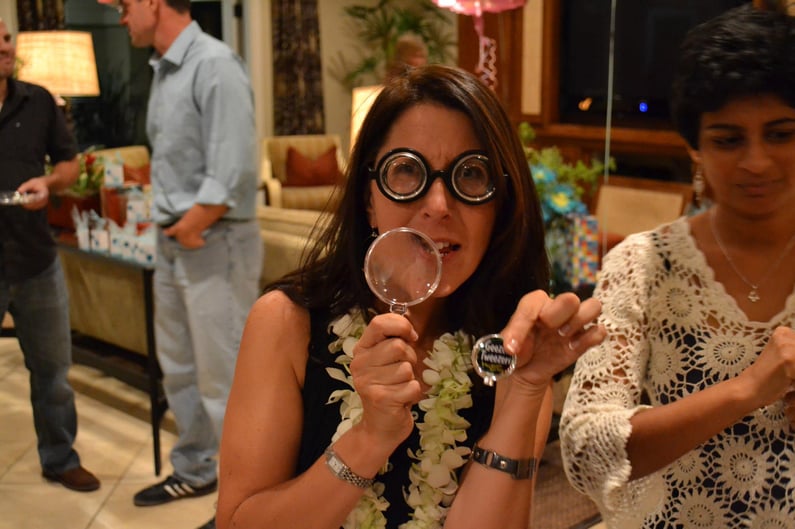 Christine's shy side coming out again.

If your friends were a little tipsy (2-3 pints) how would they describe you?
Fun. Organized. “Nothing slips through the cracks”. BTW - This question was posed at Ballast Point just to be clear. 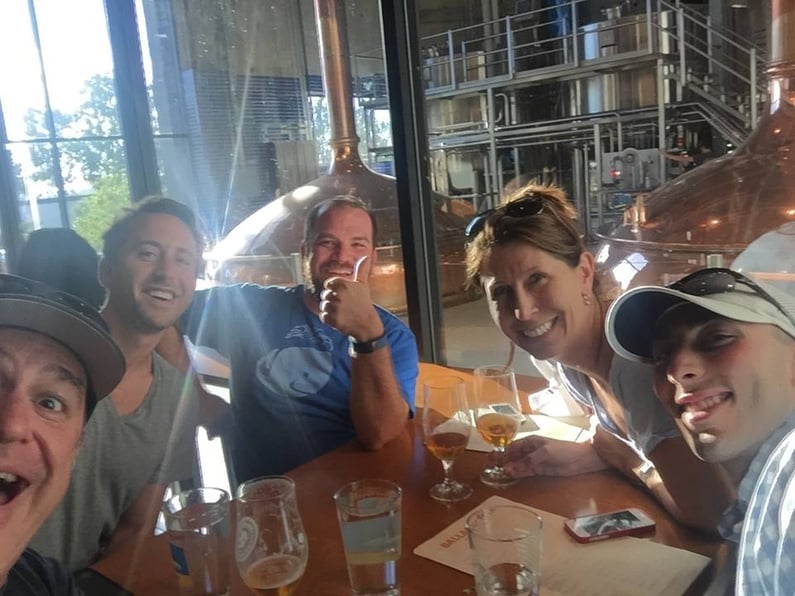 Christine and some characters working hard on our interview

When you’re a little tipsy, what are you drinking?
A very nice red wine or a local craft beer.

Hah, but it tastes soooo good.

When not at home, where do you feel most at home?
I travel quite a bit, so anytime my job takes me to New England it’s a treat. 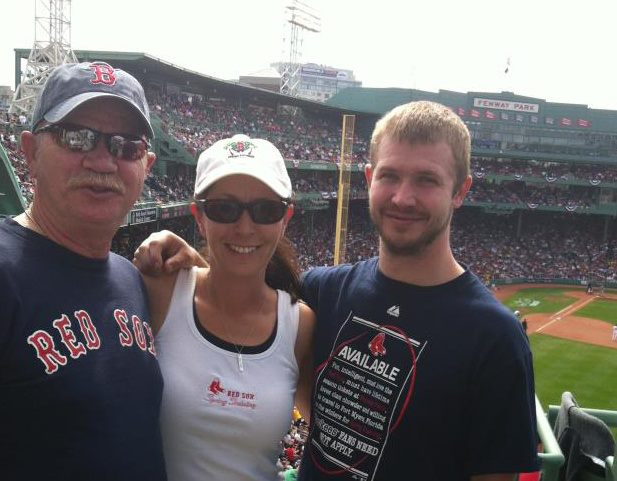 What’s your spirit animal?
Any of the big cat family. Jaguars, cheetahs, etc.

Where do you think your love for events comes from?
I’ve always been a planner in everything I do.

So, how did you get into race operations?
After years of working as an operations/project director in the tech field, I realized I didn’t have a passion for that industry. It was about the same time I started running a lot of races. I found myself constantly evaluating the events (how I would do things, make it better, etc.), as I was running.

It's like bring your kids to work day every weekend, but fun.

So I took a HUGE leap of faith and quit my job (not at all like me) and started exploring careers in the running industry. I learned who Dave McGillivray was and reached out. He graciously returned my call (actually I sent him a fax. I know, I know) and we chatted. About 4 weeks later, I pretty much invited myself to Beach to Beacon to observe his team in action and see if this was a career I really wanted to do. 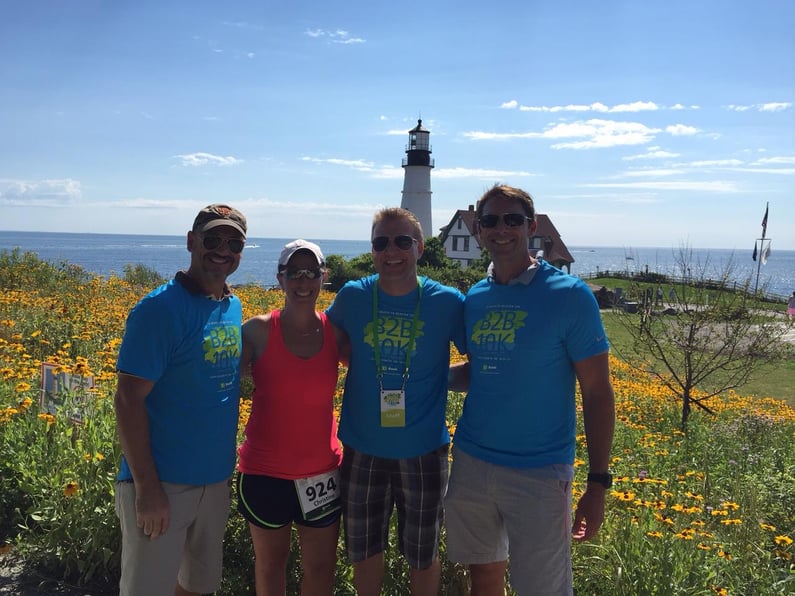 Nothing like going back to where it all began: The Beach to Beacon

It was AWESOME and his team was so welcoming. They spent a ton of time showing me the ropes and answering ever single question. Ironically I attended my first Running USA just a few months later and 3 months after that was hired as the conference director. It wasn’t until a couple of years later I started actually working on events with DMSE. I feel like I really have the best of both worlds.

Christine and the DMSE Team (i.e. their like the Navy Seals of Event Operators)

You basically have three jobs now: RunningUSA, contracting with DMSE & Mom. What motivates you?
Hands down my kids. I spend many years working in a job that I didn’t care all that much about. They get to attend races with me, they watch me participate and I know my happiness is contagious and trickles down to them.

So basically you go by #SuperMom. 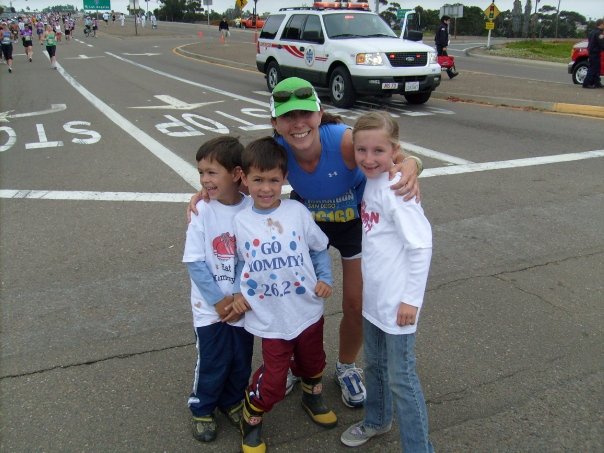 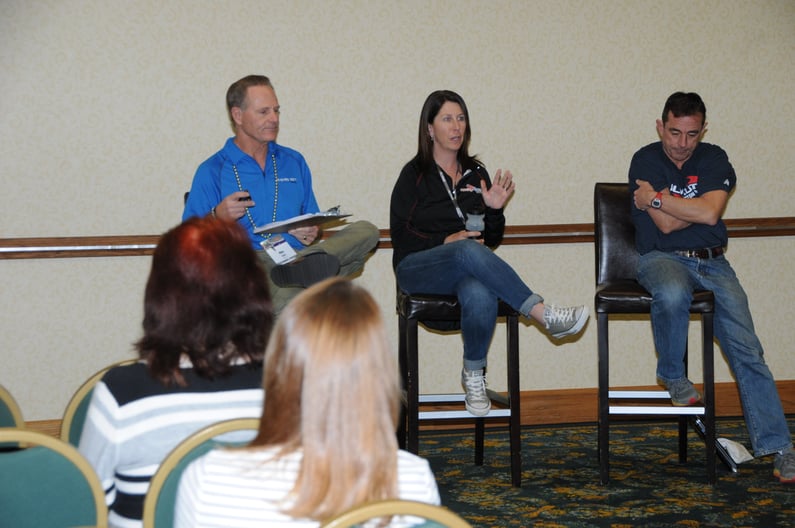 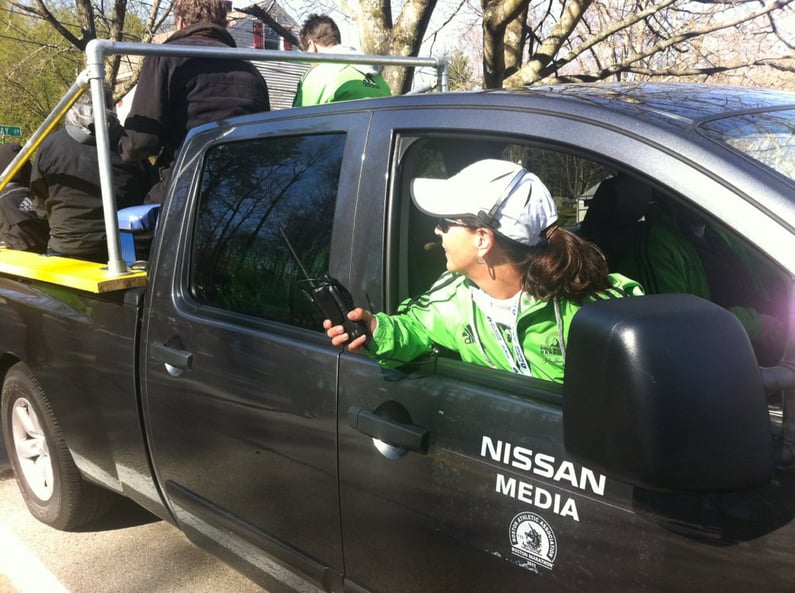 Do you have any morning rituals or routines the rest of us can learn from?I try to get my hardest, most daunting tasks done early in the morning. I do quite a bit of work with folks in other time zones, so I am usually up working by 5:30-6:00 am.

Oh, and three cups of coffee by 10am helps too;)

If one of your kids wanted to get into the race industry, what advice would you give them?
Hard work and integrity are the name of the game.

So, If you weren’t running the “show” at RunningUSA, what would you be doing?
Oh boy, I would be sipping drinks out of a coconut cup on a tropical island.

I’m calling bs on that. You wouldn’t be able to sit still.

I know, I know. But I would probably start a new event series. It would be a relay event of short distances on all of the Caribbean islands. You would have to island hop to complete the challenge.

What are 3 of the most impactful things you’ve learned from working with Dave McGillivray?

1. Be honest and transparent.

2. Make sure your plan A always has a Plan B. 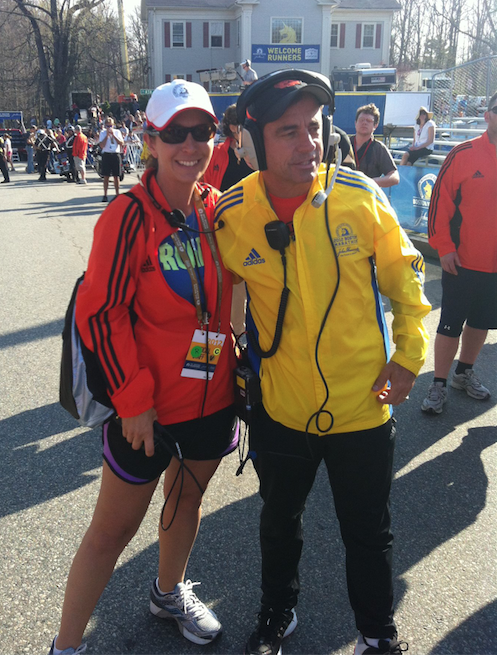 Christine and Dave McGillvray in action

So at this stage in your career, what is the best piece of advice you have received?
Don’t ever think you are above or below anyone else. You never know what someone has to offer and always make giving back a priority. I’m always a little worried about getting to comfortable and want to make sure I am pushing the envelope.

Of all of the Events you have been apart of what have been 2-3 of the most memorable moments for you?
Obviously the 2013 Boston Marathon. It’s pretty self explanatory. That was definitely a life changing experience.

Returning to Boston in 2014 was equally memorable as I hadn’t been back in a year. To get the chance to play a teeny part in that process was humbling. 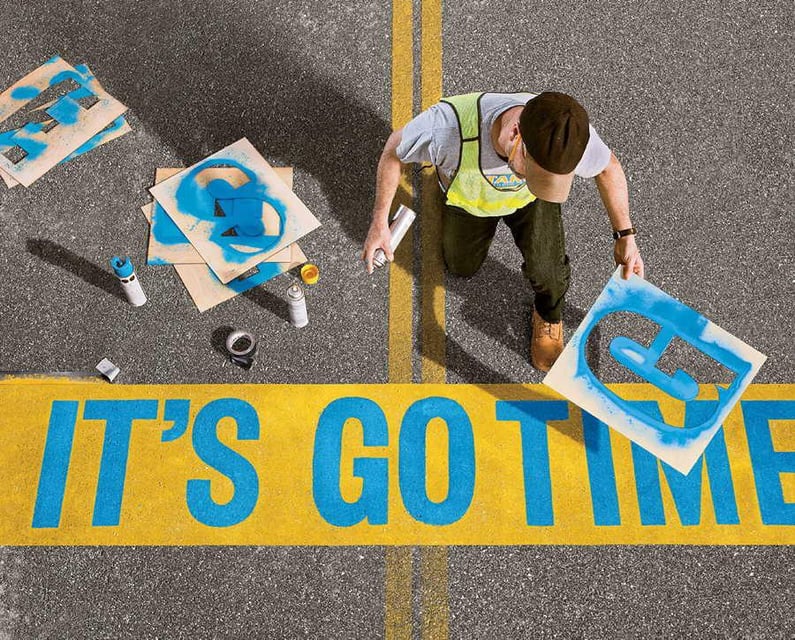 I will always have a special place for my first ever road race which was the Monument Ave. 10K with my running BFF, Nicole. 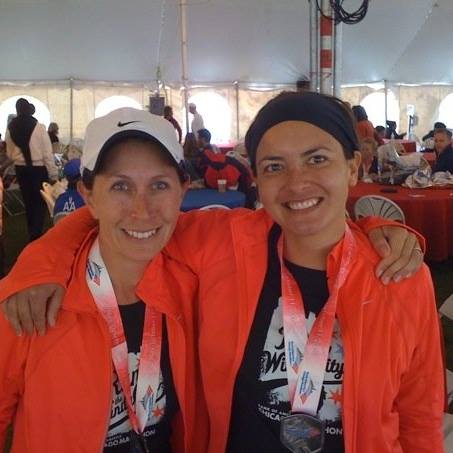 What have been the 3 biggest operational challenges with the RunningUSA Conference?

First: Moving the event from city to city each year.

Second: Making sure people are booking into the host hotel. Most don’t realize how important that is to our event and our ability to hold the event in cool cities and hotels.

Third: Growth. Two years ago we sold out because of space restrictions at the hotel. Many said it’s a good problem to have, but as far as I am concerned, it was still a problem.

What do you think the biggest impact the RunningUSA Conference has had on the Race World?
As it’s grown, it’s the one place that people in the running industry can truly come to learn and share with others in the same space.

Of all of the statistics and research RunningUSA has compiled, what is the most interesting statistic for you?
Interesting question. One area I would keep an eye on though would be in the area of diversity. I see it potentially being the next big trend that event directors should be paying serious attention.

If you could interview anyone on the RunningUSA stage, who would it be and what would you ask them?
Ed Norton Jr. I would ask him if he would be on a Ragnar Team with me.

So what’s your favorite Ed Norton movie?
Primal Fear. He is such a convincing character. Scares the bejeezus out of me!

Since this is awards season: If you were giving out Race Director awards, who would win the award for: "Most likely to be a stand up comedian in their next life"

Brian Lyons of Go St. Louis.  He makes me laugh constantly with his humor. EXACTLY when I need it most. 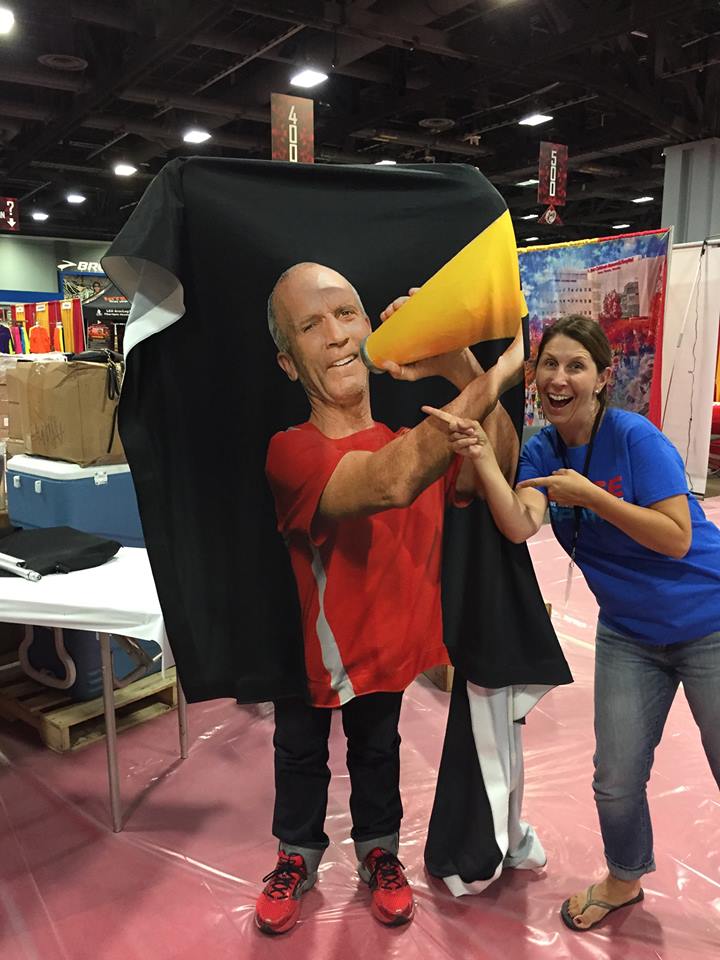 Who should we interview next?
I am going to go with Brian Lyons of Go! St. Louis. Ask about his friend Hector.

Parting Wisdom?
Take time to sincerely thank people for even the smallest things. It will make their day.

Since you have the stage, is there anyone you'd like to thank?

#1 would be my family (my amazing husband, 3 children and dog Kona) for dealing with my consistently crazy schedule. They know there are certain times where I am camped at the kitchen table 12 hours a day working, but still available to help with homework, dinner or anything they need.

#2 would be Dave McGillivray, Matt West and the entire DMSE team. They have taught me more than imaginable.

#3. I have made the most amazing contacts in this industry and I am appreciative of all of them.

MY TAKE-AWAY
I've always admired people who take some sort of leap of faith. Who say "I can do that" and actually try and do it. Who put their ego aside and start-over. Who are willing to deal with all of the insecurities of not being good or great at something yet. Who are willing to ask for help, but are also willing to help. It's people like Christine Bowen that make everyone around them better. Yes, she reaps the benefits of doing what she loves on some amazing events (which takes a crap load of work btw), but her goal is not just her gain, it's the gain of the entire community.

Bottome line, Christine is an example for all of us.