You know where the term "box office" comes from?

Good ole' Bill Shakespeare of all people. Back in the day, if you wanted access to the lower parts of the playhouse the coin was collected in a small, locked box with a slot in the top. i.e. Box Office.

It's fascinating because although a lot has changed with ticketing and credentials over few hundred years, there's still a crap-load of manual work that goes along with the entire process. It's also the first line of defense when it comes to security, access control and customer service.

So... given how much KAABOO touts itself as an upscale experience, it was great to sit down with Director of Ticketing and Credential Operations, Taylor Gustafson to get her experience, advice and how she makes this job look good. 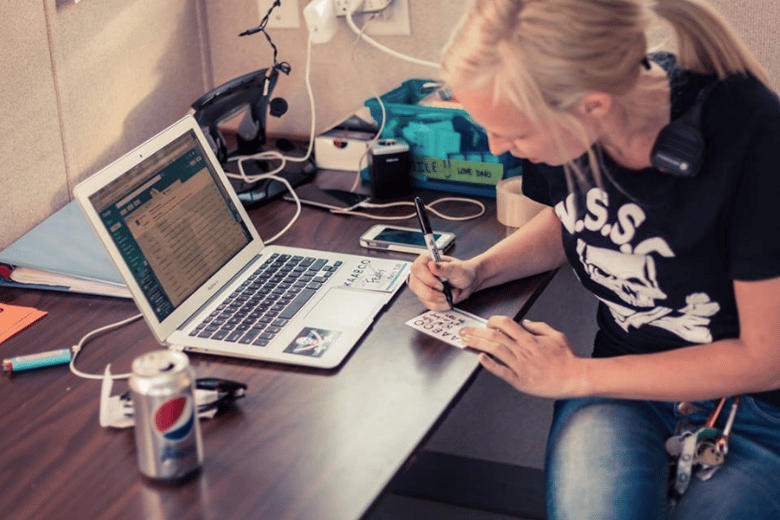 LET'S SET THE SCENE
A little caveat here: we've been working with Taylor and the KAABOO Team for the last 6 months. Sooo... even though I'm extremely biased, you'll learn pretty quickly why KAABOO has her leading the charge. You'll also learn why those same traits make for an incredible interview.

We just might have to make her a regular on our blog. Just keep reading, you'll see.

My goal for the interview was to find out:

1. What it takes to turn the box office into a customer experience asset.
2. What traits are critical to manage credentials and ticketing well.
3. How she deals with really tough customers. And staff.

She also mixed in a little career advice. But like I said. I'm totally biased. 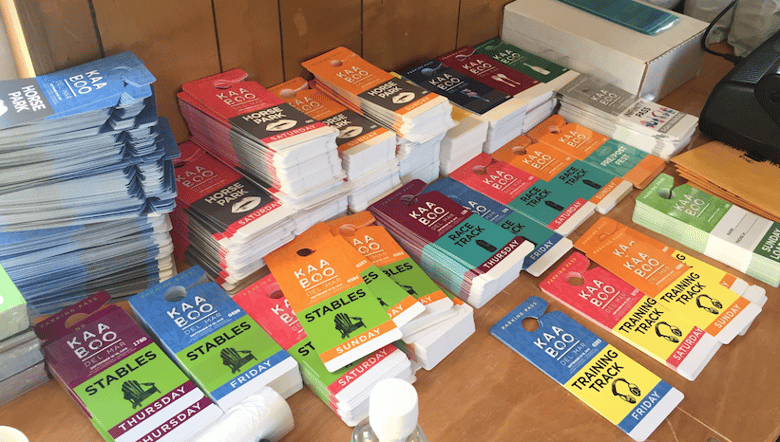 Taylor, I appreciate you doing this.
Of course. I'm stoked to do it.

So where did you grow up?
I grew up in Overland Park, Kansas, which is a suburb outside of Kansas City. 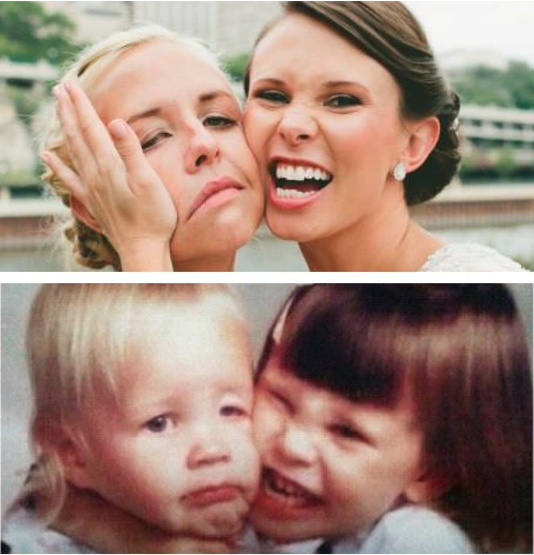 Taylor (left) and her sister.

If your friends were a little tipsy, how would they describe you?
Hah, probably a little bit too sarcastic for my own good, but deep down a good person once you get to know me. Oh yeah, and I kind of shake violently when I laugh. 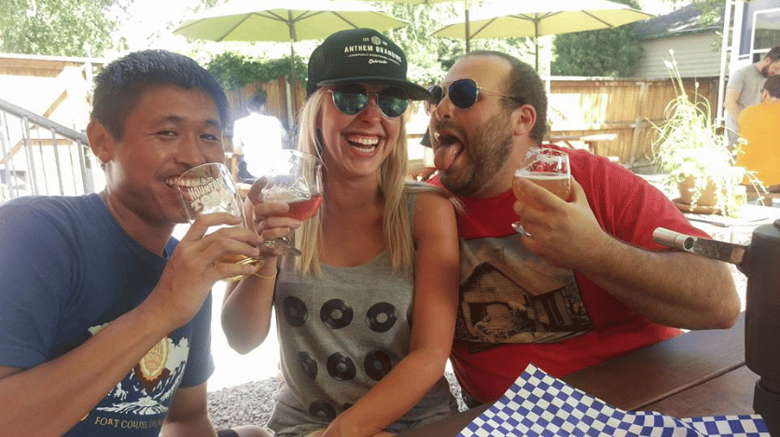 If you were a piece of festival equipment, what would you want to be?
I would want to be a Kubota. To me that's the top of the line festival equipment. You're not driving a Kubota unless you're a badass. I would hope to be the biggest badass on the festival grounds one day, which is pretty much everyone who drives a Kubota.

Well, from what I hear, you’re already a badass Taylor. Actually a few of your Co-workers described you:
“She's like Beyonce, Amy Schumer and Kittens mixed with the productivity and motivation of Leslie Knope” 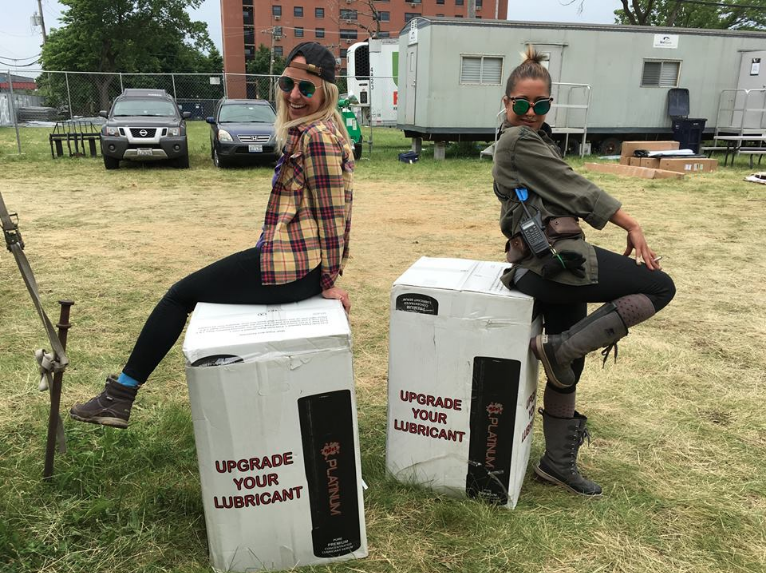 Taylor keeping things running smooth... when it comes to tickets and credential operations.

So where did you go to school and what was your major?
University of Kansas. My major was Early Applied Behavioral Science and my concentration was Early Childhood Autism Intervention.

So that applies to ticketing and credential management, how?
I use it a lot in terms of reading people's behavior when they come up to the box office to see if they're lying or not. We also do a lot of positive reinforcement for good behavior. If somebody would come up to the box office and be super nice to you, you'd want to reward that and maybe bend the rules a little bit for them. Versus if they came up kicking and screaming. I don't necessarily always want to go out of my way to break the rules to help them, because I don't want to teach that person that being mean gets you what you want.

Ahh, so you're actually doing it for them. That's nice of you :)
Exaaaactly. 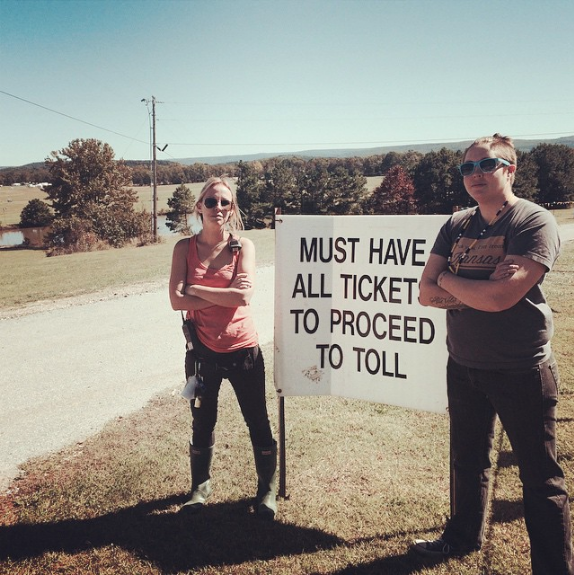 Layin down the law with Taylor "Festival Badass" Gustafson. Sometimes that's what it takes when managing creds.

So why ticketing, credentials and box office operations?
I feel like there's a thing in the industry where nobody ever gets into ticketing to stay in ticketing. They just get in because it's an open position and they hope to switch over to production, or AR, or whatever. I made that decision when I took the job at KAABOO that I'm going to be the go-to ticketing girl.

How many credentials will you distribute for KAABOO this year?
Between parking passes and daily workers, the number of creds handed out has jumped to around 8,000.

What are the three most critical things in managing the box office?
FIRST: Patience. It's basically like 18 hours a day of dealing with other people's problems. And sometimes it's really hard not to get frustrated when you have hundreds of people that are yelling at you because you didn't make it clear enough that they couldn't put on their wristbands in advance, when you know for a fact it's in 700 million different places.

SECOND: You have to be okay with missing the festival and not seeing any of the music. Realistically, any time you're doing your job you're so far away from all of the stages.

THIRD: Is that you really have to be committed and want to do the job... It's so easy to just quit and go to bed, or go see a show after 15+ hours. But to do this job well, you just having to keep going. It can be a really exhausting job. I don't think people think that I'm one of the people that's on site the most, but realistically I am. 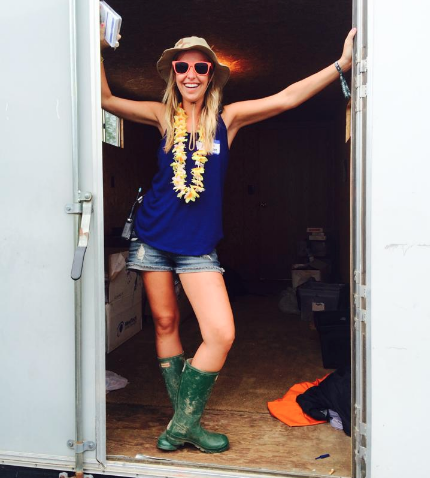 What have been the three biggest problems you faced with the credentialing process in the past?
NUMBER ONE: people not advancing their credentials. That's by far always the biggest one.

NUMBER TWO: Egos. People not understanding that they don't get the highest credential just because of who they are. It's actually based on their job.

So not everyone gets their own Kubota and an All Access pass?
Not everyone can be a production badass :) 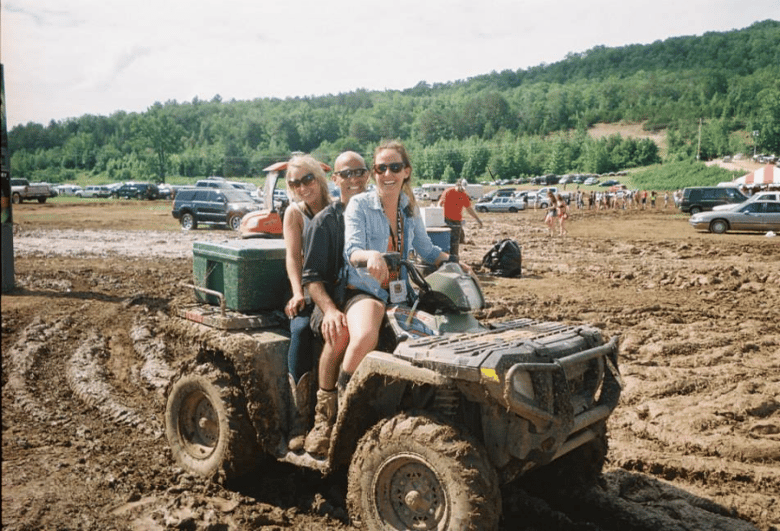 Box office operations advice: Gotta be willing to get a little dirty to make it in this biz.

AND NUMBER THREE: is credentials getting abused. Getting sold on Craigslist, or people giving them out to their friends who aren't actually working, or people who are actually working using them to sneak on stage, and stuff like that. The security issues that come along with can be a big issue.

So where those the drivers for you and the team to work with us (LENND) this year?
The reality is that advancing, credential management, comp ticket requests, etc. is too much for somebody, if you want to do it well. It's a project that however much you want done well, it's always going to come down to the last three weeks before the event. It's just too much for someone to handle in an Excel spreadsheet or Google Docs. Even the tiny little things that Lennd makes easier for us to do, may not seem like it would save a lot of time, but actually ends up saving a massive amount of time. There is such a short window that you have to do all of this in and you guys have been a great partner. We're also all really excited for next year as you build out the platform even more.

Thank you for the plug, but I'm going to have to cut you off, because it's going to start sounding like advertisement.
Well you guys deserve it. I don't see why every production team won't want to work with you. They'd be stupid not too.

I wouldn't necessarily say stupid.
Hah, just tell them to call me if they have any questions. 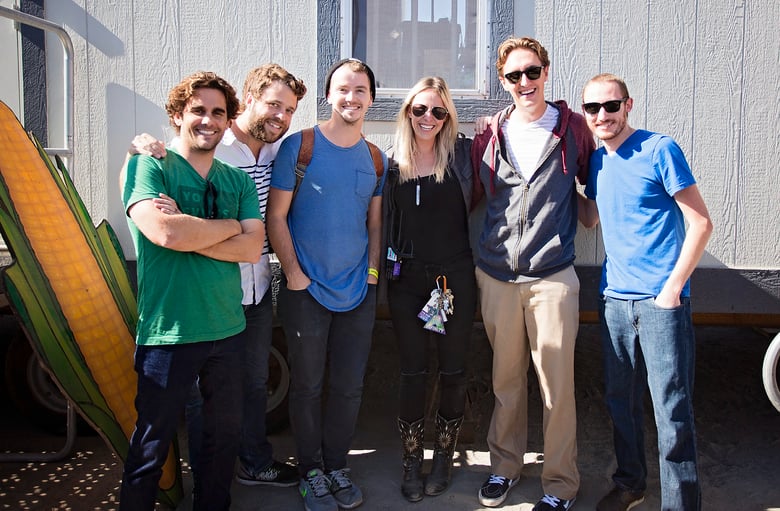 What are you and your team doing to make sure the ticketing & credential operations process is a great experience for people?

FIRST: We try really hard to give each guest the experience that they want to create out of KAABOO. With that being said, logistically it's just not possible to let every single person do whatever they want. I would love to refund everyone that wants a refund, but it's not realistic, so we try to come up with creative solutions to help people around the processes and procedures. It's also really important to keep a positive attitude for the staff on site. To not get frustrated and a little angry at times can be hard. It's customer service.

I am sure you deal with some beauties.
Hah. Sometimes you're getting yelled at all day, every day. So not taking that out on the next guest can be really difficult at times. We try really hard on that.

SECOND: we talk to people as if they're people. We have our own in-house phone and we try to answer every call by the second ring. You're not going to some 1-800 number and waiting 20 minutes. It's three of us girls sitting in the office, so it's kind of cool because we develop relationships with a lot of people. Some will even come visit us at the box office on site, which is always my favorite part. 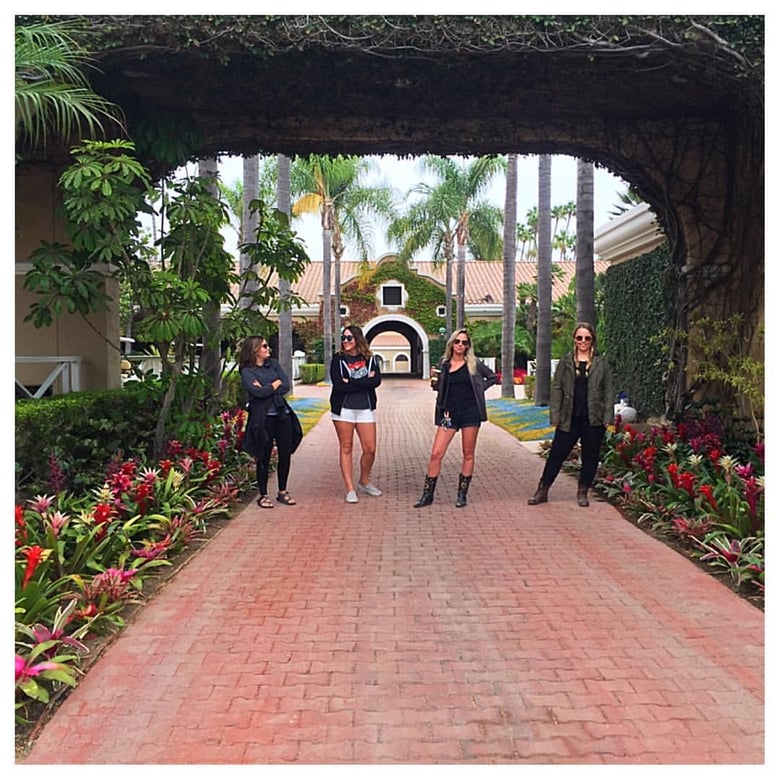 What's the best piece of career advice you've received and from who?
Well... [she giggles a little] I get a little heated about things at work at times, because I've made the decision that this job is essentially my life. Which, by the way is probably not the healthiest thing in the entire world. Soo... I tend to let work things bother me more than they should.

That's why Brian Wingerd, our SVP of Marketing is constantly telling me, "Just keep your head down and keep working, don't get caught up in the random bullshit like the shitty emails people send. Just concentrate on what you're here for. And that's to give people an incredible experience". That advice really helps and I have to tell myself that a lot.

So in your work life, are you insecure about anything?
Sometimes I feel like I'm not respected as much as I should be because I'm a female, or because I'm still in my 20s, and I've only been doing this for three years. Every once in awhile Nate [Nate Prenger is KAABOO's Head of Production] will see me start to get a little heated when people won't work directly with me and will go straight to him on things.

So, how do you deal with it?
Luckily he just forwards them back to me. So basically I just force them. They eventually learn that if they don't work with me, they're not going to get what they need. I'm not going to let them work their way around me, just because you think I'm an idiot because I'm younger. I just refuse to let other people get away with it when that happens. 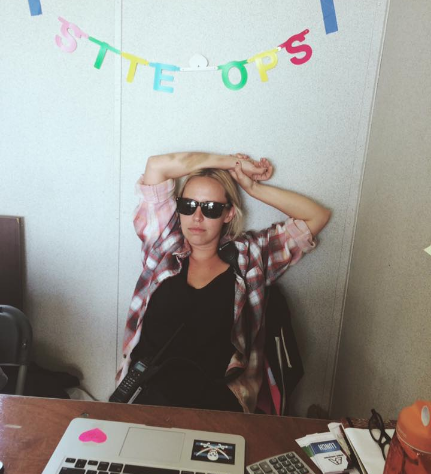 Parting Wisdom?
Don't hold on to all of the negative. Concentrate on the positive, because that's what really makes it worth it.

WHAT IS LENND?
Lennd is an operations and workforce management platform for events. We're currently in a private beta with some of our favorite events around the globe, but you you're interested in a demo add email HERE.

Get event tips, interviews, advice... Delivered Weekly.
Join the top event professionals who get our content in their inbox first.
Give it a try, it only takes a click to unsubscribe.
You might also like...
Managing Ticket and Credential Requests with Eventbrite's Biasha Mitchell
Behind the Evolving World of Event Production with James Klein
Behind Baltimore's Citywide Festival Operations with Kathy Hornig
A Career in Event Operations with Townsquare Media's VP of Live Events Sally Lidinsky
Behind the Evolution of the Essence Festival with Anika Grant
Event Sustainability Advice with Jen Caruso of Caruso Presents