INTRODUCTION
There are very few events around the globe that have helped change the face of more industries than TechCrunch Disrupt. Yes, I'm sure you can rattle off a few: SXSW, CES, YComm Demo Day, etc., but the reality is that most have not had the sweeping impact that TechCrunch Disrupt has had (and still has) in launching so many different businesses, in so many different industries.

(If you're not familiar with TechCrunch Disrupt, it's like Silicon Valley's NFL Combine or Shark Tank on Steroids).

So... as a wanna-be investigative journalist, I wanted to go behind the curtain and meet one of the heavy hitters responsible for such an incredible event. 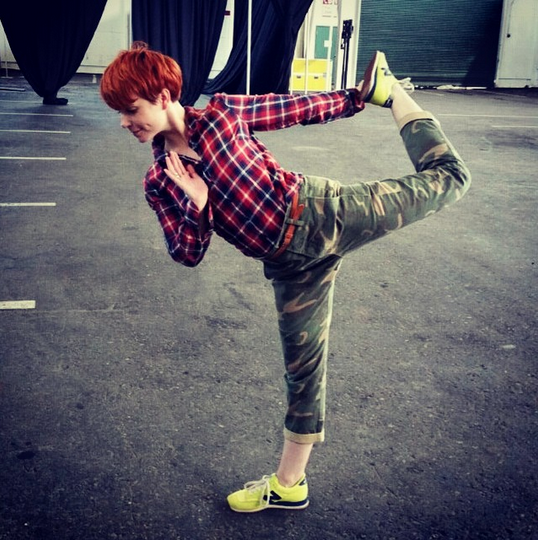 What I found was a perfect mix of whit, style, tech geekery (if that's a word), detail, power and presence. Who I found was event producer Leslie Hitchcock, aka: @LSH

Let's Set the Scene
You know the old saying, "if you want to get something done, ask the busiest person in the room". Well, I found her. 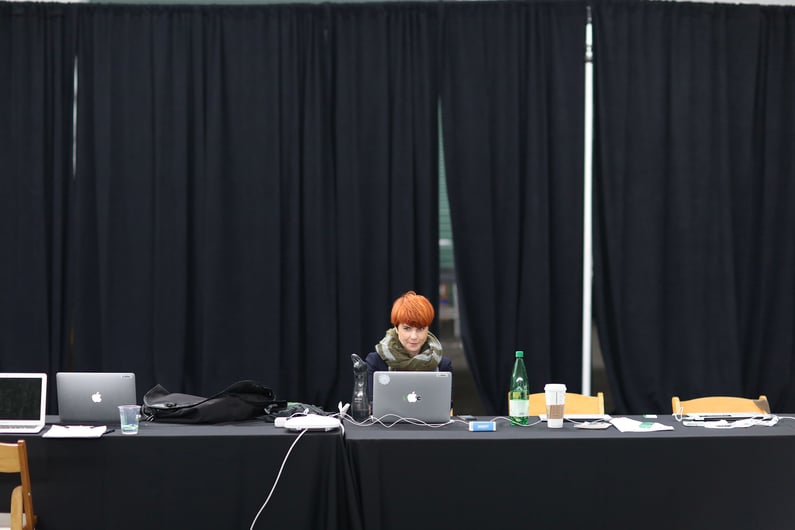 Leslie, thank you for doing this.
Of course, this will be fun.

What was 10 year old Leslie Like?
Hmm, I'd say very precocious, obsessed with studying ballet, and getting good grades. She was frustrated that she was the smallest person in her class, but has since gotten used to being petite. 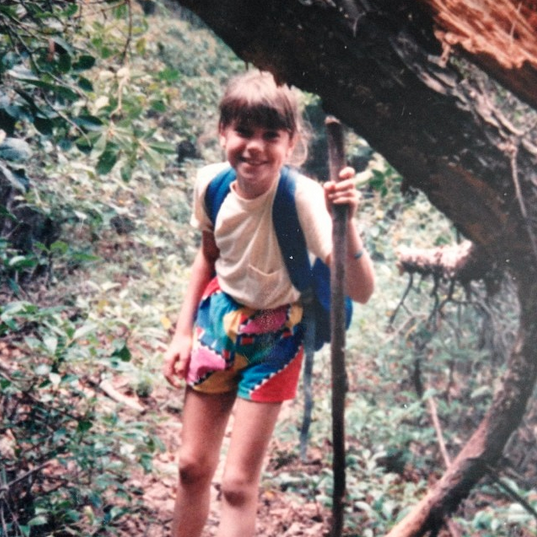 Big Family, Small Family?
I have 2 younger brothers and my parents have been happily married for 40 years! I come from a large extended family. So I spent a lot of time on my grandparents massive farm playing with my brothers and cousins when I was young.

When not at home, where do you feel most at home?
London or the southern coast of North Carolina

What’s your spirit animal?
A bird of prey.

And, if your friends were a little tipsy (2-3 pints) how would they describe you?
The most stylish person they know. Great shoe collection. Takes care of the people close to her. Goofy.

Event Productivity Tips by @LSH: Comfy Shoes: Check. A little Yoga in the middle of the madness: Check

So when you’re a little tipsy, what are you drinking?
A California Pinot Noir

I understand you're a bit of a burger officianado.
Burgers are my FAVORITE.

Any burger recs in SF you'd like to share?
The best ones in SF are either from Super Duper Burgers (a chain, but completely reputable) or RN74.

If you weren’t running the “show” at TechCrunch Disrupt, what would you be doing?
I don't know if I 'run the show' exactly, but if I wasn't obsessed with TechCrunch, I'd work in fashion.

@LSH behind the scenes. Who says you can't look good when running the show?

So, who's your style icon?
Jackie Onassis, who I happen to share a birthday with. Auspicious!

Given your propensity for stylish kicks, do you have a go-to pair the week of a big event?
Well, it changes, but these are my Day 3 shoes. As I like to say, "On Wednesday we wear flats." 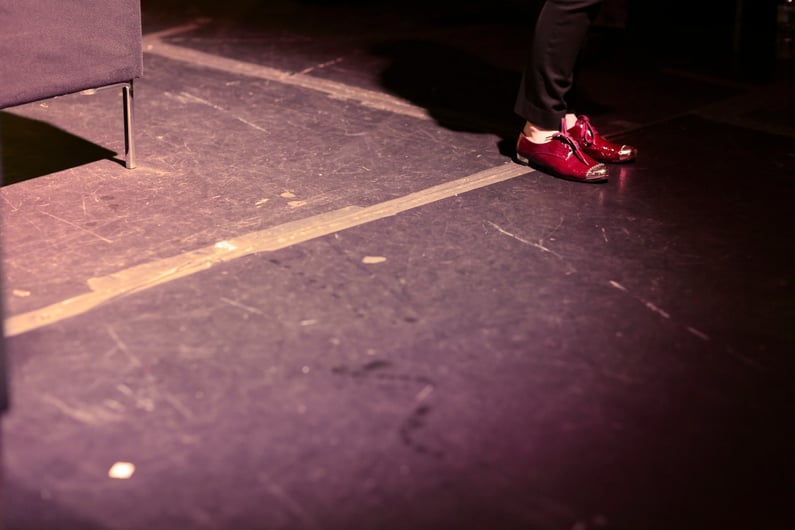 Event Tip #2 with @LSH: There is always room for style.

At this stage in your career, what is the best piece of advice you have received?
"Those who are flexible NEVER get bent out of shape." and "Always give the glory to your team." I try my hardest to live by both.

And in 10 years, what do you want to be most proud of when it comes to your work?
Leading fantastic teams to do amazing things in their careers. 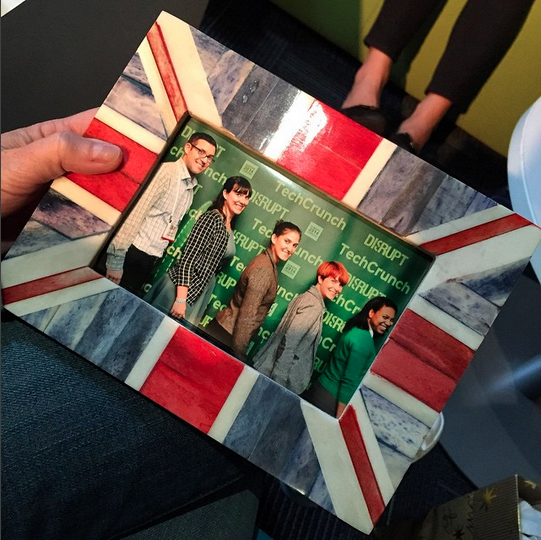 In your work-life are you insecure about anything?
I think everyone is, and sometimes the dreaded 'impostor syndrome' hits. Usually when I bump up against a challenge I've not faced before.

If you could produce any event in the world, what would it be and what would you change?
Working in events is such a unique thing. I'd be really curious to see the inner workings of the Fashion Weeks. If I could add anything to those, it would be making them somewhat more accessible. Although technology has done a lot to make that happen already, I can think of a number of ways to make it even more engaging. 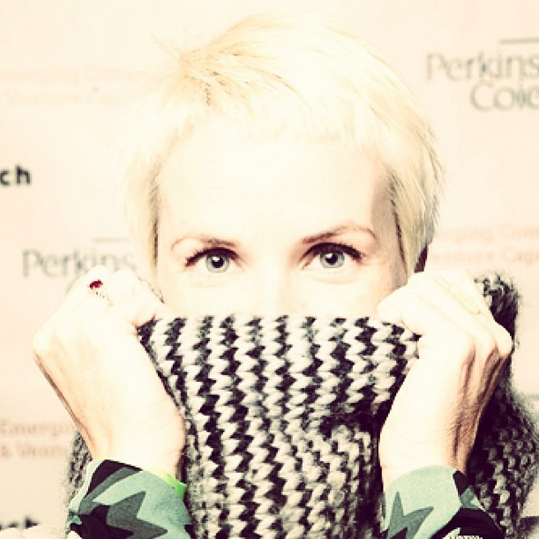 What is your favorite part of producing Disrupt?
It is such an honor to be affiliated with TechCrunch Disrupt and my favorite part is Hackathon weekend and the energy that comes when we open the doors on Monday morning. The advance work that goes into producing the conference is enormous and special.  There is a special excitement I feel when planning the calendar for the coming year.

How many Staff, Volunteers, Contractors and Sponsors did it take to put on the last TCD?
Gosh... A lot. In New York in May alone we had 7 operational staff, 30 members of the editorial team, 50-60 volunteers, a core group of 15 contractors, an army of labor and catering staff, plus 45 sponsors. 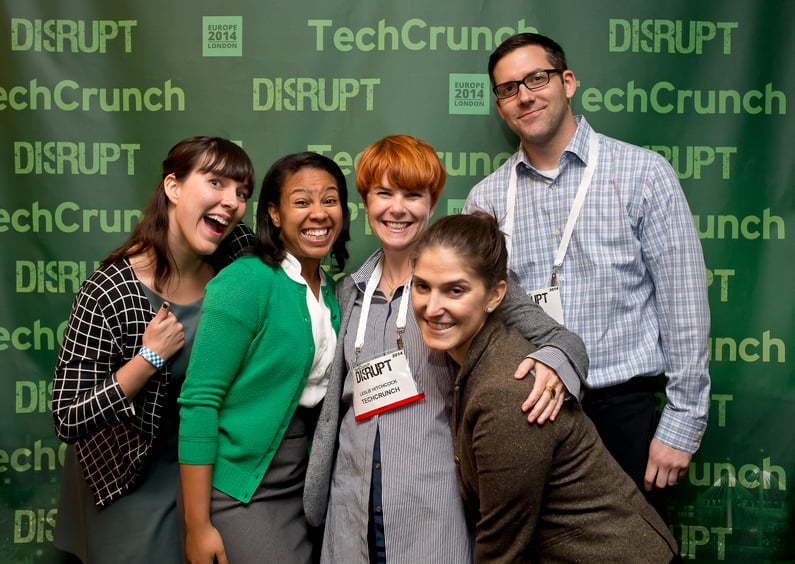 @LSH and her Team #2. Every great Event Producer needs a great cast.

Of all of the TechCrunch Events you have been a part of, what have been 2-3 of the most memorable moments?

1. I initially joined TechCrunch in a marketing capacity and at that point it was all hands on deck for Disrupt. My first Disrupt (Disrupt NY 2011) I looked around in amazement and thought to myself 'This is a job?? I want to do this!' Game changer.

2. Mark Zuckerberg (Disrupt SF 2013) on stage for his first interview post-IPO. The stock price soared afterward and it was incredible to witness that event coming from our stage.

3. Leandra Medine (Disrupt NY 2015) is building a unique media / fashion brand in NY and is one of my personal heroes. When I ran into her backstage without being prepared to meet her, I was a pile of mush and very nervous. Her interview with Alexia Tsotsis was wonderful.

This is #PileofMush Leslie when meeting Leandra. Leandra is in the bottom left.

What typically has been the 3 biggest operational challenges to launching Disrupt?

1. Finding a suitable venue: TechCrunch has an incredibly distinct style, so we'll never be in a hotel or a convention center. That makes things challenging in all of the cities we produce Disrupt in. 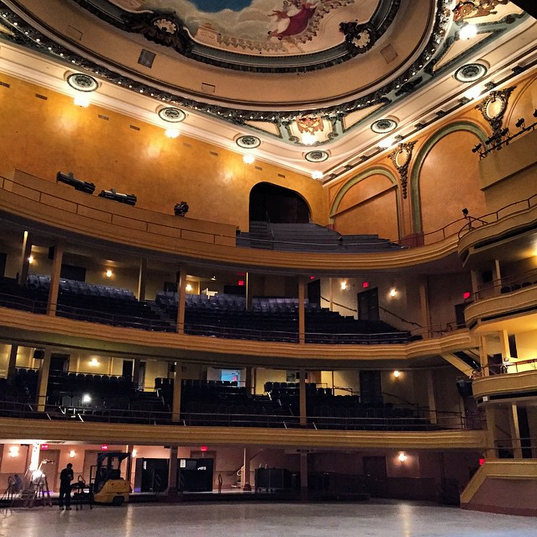 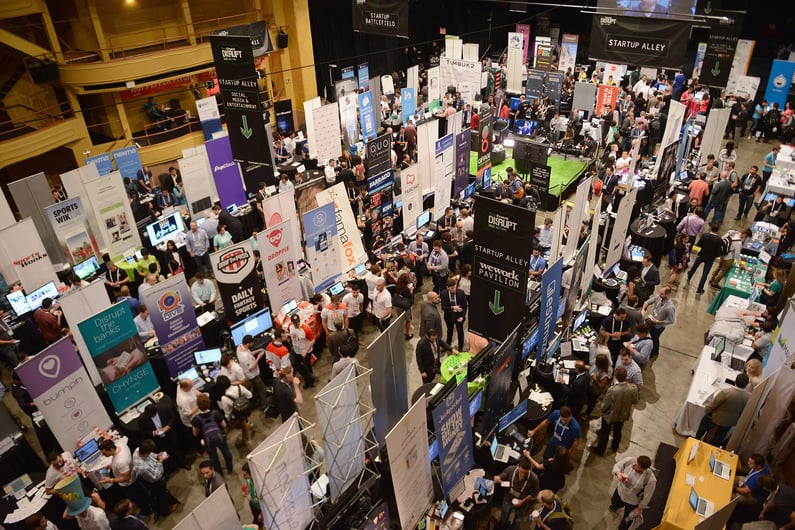 2. Wifi: Always a struggle, but we have the best partner, who keeps getting better with each conference.

3. Unforseen complications: like an explosion 50 yards outside the backdoor of Disrupt NY 2015 that shook the building, produced a fire underneath the street, and knocked out our internet provider for the rest of the day. A media company with no internet for 8 hours, quite the adventure.

You’ve probably dealt with more high maintenance billionaires (or soon to be) than anyone in the world?
We have a Conference Program Chair who deals with a lot of the 'personalities' but everyone I've escorted around the conference and whose security details I've worked with has been incredibly gracious and warm. Promise! 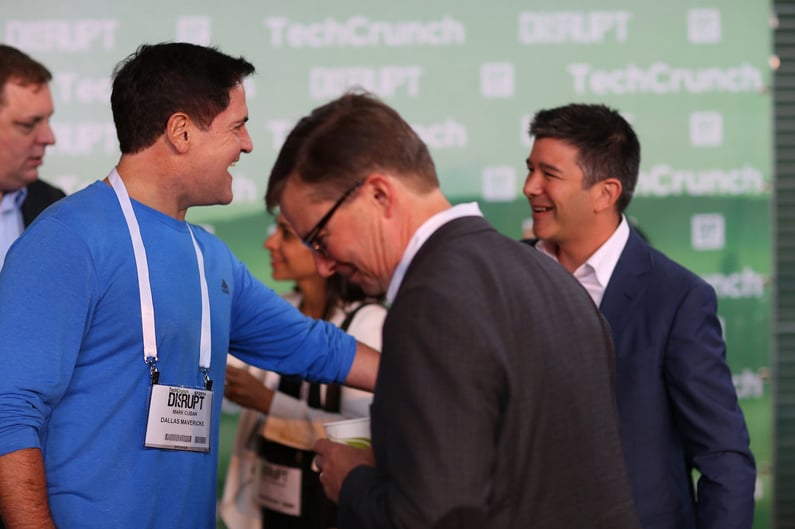 Photo Cred by @MaxMorse for @TechCrunch. Here's a few "personalities".

Have any other events served as inspiration for you and your Disrupt staff?
I like for my team and I to go to other events to get a taste of different ideas that we could include as part of our events. One event we have a great relationship with is SXSW Interactive. We have an annual badge trade with their team. It's great to learn from each other. I also admire what Tech Open Air has built in Berlin each summer. My team and I cower at the thought of ever getting as large as something like DreamForce, such a feat to execute.

What is the biggest impact Disrupt has had on the tech community?
I think the fact that the HBO show Silicon Valley features TechCrunch and Disrupt so prominently is a testament to the startup culture and the position TechCrunch has in it. That's a huge reason why I am so proud of my work: we are giving a voice to hundreds of startups around the world who wouldn't have the opportunity otherwise. 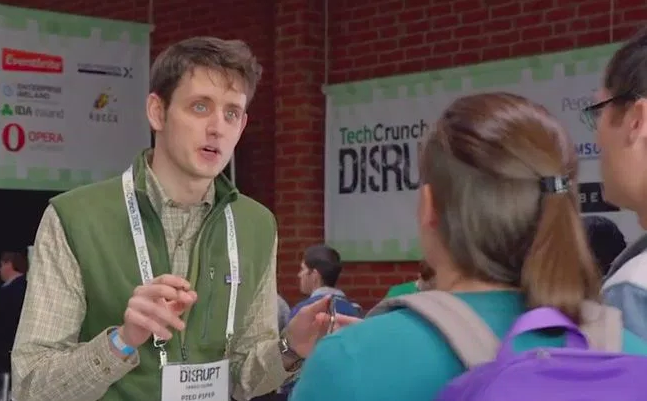 Speaking of Silicon Valley: who's your favorite character?
Gabe

Wow. Jared (aka Gabe from "The Office"), really?!? I think we may need to do a whole other interview for this one.

How important is Disrupt to the overall success of TechCrunch in general?
Quite a lot. I see the Disrupt Conference as another medium for the already incredibly successful editorial staff, a way for them to do what they do best, but in front of people. I think it adds a lot to the blog for the conference attendees to see the editorial team in person and the amount of news they break on stage makes them a tech media force to be reckoned with.

How has your strategy with the event changed over the years? (especially as more and more events pop up)?
A lot of it has stayed the same in terms of production value, but we're constantly working to find even more ways to benefit the startups in the Startup Alley. They are a huge part of the conference and we want to make sure they get more and more value out of attending Disrupt every year.

If you could interview anyone on the Disrupt stage, who would it be and what would you ask them?
I'd LOVE to interview someone one day and while we're in this daydream, it would be Hillary Clinton.

I’d ask her: If she's decided if tech jobs created by the sharing economy are important or not. And if they are here to stay, how she'll adapt her policy.

So what do you think your interview style would be like?
Butter her up and then go for it.

As any bird of prey would, right?

Which TechCrunch staffer typically gets the most retweets from you?
@JohnBiggs always makes me laugh. @JordanCrook is also hilarious.

Who should I interview next?
Chris Valentine, SXSW Interactive

Get event tips, interviews, advice... Delivered Weekly.
Join the top event professionals who get our content in their inbox first.
Give it a try, it only takes a click to unsubscribe.
You might also like...
Managing Ticket Operations and Crowd Safety with AC Entertainment's Zach Edwards
Managing Ticket and Credential Requests with Eventbrite's Biasha Mitchell
Behind the Evolving World of Event Production with James Klein
Behind Baltimore's Citywide Festival Operations with Kathy Hornig
A Career in Event Operations with Townsquare Media's VP of Live Events Sally Lidinsky
Behind the Evolution of the Essence Festival with Anika Grant